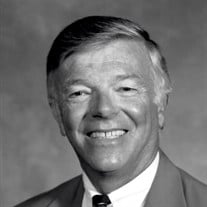 William Louis Weber, Jr., age 86, of Kenmore, Washington (formerly from Beverly Hills, Michigan) passed away peacefully on October 17, 2021 surrounded by his wife and five children. He is survived by his wife, Bridget, his four sons William III, Clinton, Kurt, and Vincent, his daughter Claire, his sister Margaret Ann Quinn, his three daughters-in-law Sherry, Sue, and Anna, his five granddaughters Charlotte, Sandra, Olivia, Stella, and Frances, and two grandsons William IV and Zane. Bill was born on December 9, 1934 to William Weber, Sr. and Barbara (Sutton) Weber of Zanesville, Ohio and was the third child, having two older sisters, Ursula (Weber) Antonetz and Margaret Ann (Weber) Quinn. He attended Bishop Rosecrans High School and went to Marquette University in Milwaukee where he was a member of their ROTC program. After graduation, he served in the U.S. Navy as an officer. After his service, he attended law school at the University of Cincinnati. Upon completing his degree, Bill joined the Navy Reserve and served for an additional 20 years in Naval Intelligence. He later accepted a position at the Federal Trade Commission in Washington DC in the anti-trust department and there he met and married Sandra (Winne) Weber. They had three sons, William III, Clinton, and Kurt. They later moved to the Detroit area in 1968 when Bill accepted a position at the Automobile Manufacturing Association. His performance drew the attention of the automotive industry, and he was offered a position with the legal department at General Motors (GM). At GM, he worked in both environmental law and product safety. The phrase most of us are familiar with on our side mirrors, “Objects in the mirror are closer than they appear,” is one of the many projects Bill worked on in the field of product safety. During this time, his wife Sandy passed away, and Bill continued to raise his sons in Beverly Hills, Michigan. In 1995, Bill married Bridget (Wolfe) Weber of Zanesville, Ohio, and they had two children, Claire and Vincent. They enjoyed a rich life together and were known for their hospitality and backyard bonfires. When Bill retired from GM in 1997, he continued his legal career at Daniels and Kaplan, opening their Detroit office and working in the field of tort reform and engaging in an arbitration and mediation practice. The State Bar of Michigan’s ADR (alternative dispute resolution) Section conferred upon Bill its Distinguished Service Award in 2013. He joined the roster of Emeritus Members of the State Bar of Michigan in 2019. After leaving the law firm, Bill founded Professional Resolution Experts of Michigan (PREMi), the largest ADR company in Michigan, that continues to thrive today. Bill was also named an adjunct professor at Thomas Cooley Law School. In 2018, Bill and Bridget moved to the Seattle area to be closer to their daughter, three oldest sons and their families. Bill’s personality was bigger-than-life. He had boundless energy and enthusiasm. He was intelligent, well-read, and humorous with a legendary dry wit. He was a counselor, advisor, and confidante to many. He loved golf and tennis and played regularly. He played squash competitively, earning a national ranking, well into his eighties. Bill was a practiced and amazing storyteller, having spent time in Toastmasters and never relinquishing the quest to entertain company through story. In the last three years, Bill experienced countless grandkids’ birthday parties (where his repertoire of stories would be continuously interrupted), Bloody Marys with his adult children and spouses, and debated the tragedy that is the Detroit Lions. He cherished his family and loved family above all else, including his sister, his kids, his grandkids, his nieces, and his nephews. A memorial service will be held on November 5, 2021 at Edmonds Yacht Club in Edmonds, Washington. Video livestream will be available. Information about the service can be found on the Beck’s Funeral Home website: https://www.becksfuneralhome.com/obituaries/William-Louis-Weber-Jr?obId=22703489#/obituaryInfo. To sign the local guestbook or leave a personal note of condolence please visit www.hilliscombsnestor.com. In lieu of flowers, donations may be made to Seattle Children’s Hospital: https://give.seattlechildrens.org/billweber

William Louis Weber, Jr., age 86, of Kenmore, Washington (formerly from Beverly Hills, Michigan) passed away peacefully on October 17, 2021 surrounded by his wife and five children. He is survived by his wife, Bridget, his four sons William... View Obituary & Service Information

The family of William Louis Weber Jr. created this Life Tributes page to make it easy to share your memories.

Send flowers to the Weber family.