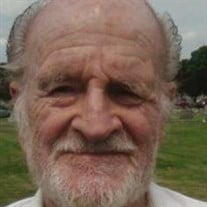 William "Bill” Carrell, age 93, of Zanesville, died 2:05 PM, Wednesday, February 17, 2021, at Willow Haven Care Center in Zanesville. He was born Thursday, December 1, 1927, in Piketon, OH, the son of Elmer Carrell and Dora (Rapp) Carrell. He was married on August 4, 1945, to Betty (Lewingdon) Carrell, who preceded him in death on February 9, 2006. He was a member of St. Thomas Aquinas Catholic Church, where he was very active, serving as a Sacristan and Eucharistic Minister. He was devoted to the care of the poor, sick, home-bound, a member of the St. Vincent DePaul Society and worked for the US Postal Service in Columbus. He served his country in the United States Army and Merchant Marines. He is survived by four children: William "Sonny"(Phyllis) Carrell, Jr. of Redlands, CA; Teresa Goldhardt of Springfield; Michael Carrell of Zanesville; Angela Mitchell of Roseville; five grandchildren and a special grandchild, Krista Yabe of the United Kingdom; one great grandchild, Motoki Yabe; one sister, Josephine Courts of Millersport, and a host of nieces, nephews and friends. In addition to his parents and wife he was preceded in death by one grandson, Matthew Stapleton and eleven brothers and sisters. A Funeral Mass will be held 10:30 AM on Wednesday, February 24, 2021, at St. Nicholas Catholic Church, 1020 East Main Street, Zanesville, with Fr. Jan C.P. Sullivan as celebrant. Full military honors will be conducted by the VFW Post #1058 and American Legion Post #29 immediately following the Mass. Burial will conclude in the St. Joseph Cemetery, Lockbourne. To sign the online register book or to send a personal condolence note please visit www.hilliscombsnestor.com.

The family of William "Bill" Carrell created this Life Tributes page to make it easy to share your memories.

Send flowers to the Carrell family.