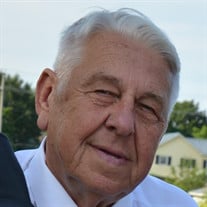 Willard “Bill” Edward King, Jr went to meet his Savior on Sunday October 13th at 6:00 pm following a short illness. He was under the tender care of his family, Adams Lane Memory Care Unit and Genesis Hospice and Palliative Care at home. He was born April 4th 1935, son of the late Willard Edward Sr. and Gertrude Mae Swope King and his brother Harold who preceded him in death. He is survived by his loving wife of 64 years, Charlotte Basford King and their 4 children: Karla and Jason Rusk, Willard Kevin and Jo Ford King, Shari and Jeff Wilson and Susan and Jeff Haller. He is also survived by his 10 grandchildren Willard Kyle King and Heather Kufchak, Joshua and Lindsay Wilson, Whitney and Jim Dravec, Matthew and Ashley King, Adam King, Katie Wilson, Lindsey Haller, Nick Haller, Kevin Ford, Kent Ford and great granddaughter Charlotte Wilson. He is survived by his nieces and a nephews Kim and Tom McNany and daughters Amanda and Sidney Jeren, Danielle and Austin Buti, Wesley King , other family and friends Holly and Jim Mertes and Robin and Doug McQuaid as well as an extended family of caring friends and neighbors. Bill worked for the Kroger Company and retired as Dairy manager after 41 years of service. He was a man who put his faith and family first. He was a longtime member of Trinity Evangelical Lutheran Church where he faithfully served as a Deacon for many years at the 8:00 AM service. Friends may call from 4:00 PM to 8:00 PM, Wednesday, October, 16, 2019, at the Hillis, Combs & Nestor Funeral Home, 935 Forest Avenue and one hour prior to services from 12 noon to time of service on Thursday at the church. Funeral Services will be held 1:00 PM, Thursday, October 17, 2019, at Trinity Evangelical Lutheran Church with Rev. Andrew Wilson officiating. Burial will follow in Greenwood Cemetery, Memorial contributions may be made to Trinity Evangelical Lutheran Church or Genesis Hospice in Bill’s memory. To sign the online guestbook or leave a personal note of condolence please visit www.hilliscombsnestor.com

The family of Willard "Bill" E. King, Jr. created this Life Tributes page to make it easy to share your memories.