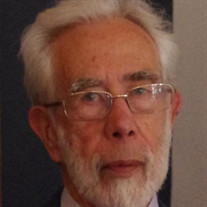 Whiten G. "Whitey" Mauk, 94, of Zanesville, passed away Monday, May 30, 2022, at his home. He was born Monday, May 28, 1928, in East Fultonham, the son of Glenn Mauk and Catherine (Cannon) Mauk. He married the love of his life, Alice (Zandlo) Mauk, on Saturday, November 3, 1956. Whitey served his country as a veteran of the United States Army during the Korean Conflict. He retired from McGraw Edison following many years of service. He was a member of the Ohio Society of Professional Engineers, the American Institute of Electrical Engineers, the Institute of Radio Engineers, and Toastmasters International. Whitey, along with his wife, was very active in the local performing arts. He was involved in Zanesville Community Theater, Cambridge Performing Arts Center, and Zanesville Memorial Band Board, where he served as past president. He was very active in his community serving in Junior Achievement and was a volunteer with Genesis Healthcare System for over 25 years. He is survived by one daughter, Kathy (Richard) Kibler of Hartville; two grandchildren, Miranda Kibler, of Columbus and Robert Kibler of Hartville, and many wonderful friends. In addition to his parents, he was preceded in death by his beloved wife, Alice Mauk. Friends may call from 6:00 PM to 8:00 PM, Friday, June 3, 2022, at the Hillis, Combs & Nestor Funeral Home, 935 Forest Avenue, Zanesville. A funeral service will be held 11 AM, Saturday, June 4, 2022, at the funeral home. Burial will conclude in the Zanesville Memorial Park Zanesville, where the United States Army and VFW Post 1058 will conduct full military honors. In lieu of flowers, donations may be made to the Alice and Whiten Mauk Endowment Fund c/o Genesis Foundation, 1135 Maple Avenue, Zanesville OH 43701. To sign the online register book or to send a personal condolence note please visit www.hilliscombsnestor.com.

The family of Whiten "Whitey" G. Mauk created this Life Tributes page to make it easy to share your memories.

Send flowers to the Mauk family.