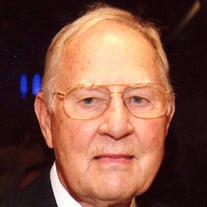 Wendell R. Ware, 84 of Hopewell, died 6:00 PM, Wednesday, February 27, 2019, at his home. He was born Monday, January 21, 1935, in Coxs Mills, WV, the son of Alta Shackelford and Thelma (Ware) Shackelford and married Ruthie (Porter) Ware on Sunday, August 17, 1969. Wendell was a graduate of Troy High School in West Virginia. He honored his country in the United States Navy, serving active duty tours in Japan, Alaska and the States. He flew reconnaissance flights as the radar operator on many missions over Russia. He was a graduate of Morris Harvey College with a Bachelor of Science Degree in Chemistry in 1960. Following graduation he taught Chemistry at Newark High School, then to Kaiser Aluminum as the Chief Industrial Engineer until 1970, when he founded Ware Plastics, Inc. on Central Avenue in Zanesville. Following his retirement he enjoyed working his farm in Hopewell. Wendell coached golf while at Newark High School and was an avid sportsman. He was a member of the American Quarter Horse Association, where he competed for several years in Cutting. He was also a member of the American Trapshooting Association, American Motorcycle Association, competing in flat track, road racing and vintage racing, and the American Pilot Association (earning his commercial and instrument pilot’s license), logging many air miles. Wendell was a competitive runner earning entrance into the 100th Boston Marathon, as well as many local races. He had a passion for life and a zeal to do all things well. In addition to his wife of over 50 years, Ruthie, Wendell is survived by one son: Todd (Christy) Ware; two granddaughters: Danielle & Katie Ware; two sisters-in-law: Jenny Porter and Janice (Wayne) McMillan and several nieces and nephews. In addition to his parents, Wendell was preceded in death by a step-brother: Calvin Shackelford and one brother-in-law: Steve Porter Friends may call Monday, March 4, 2019, from 2:00 to 4:00 & 6:00 to 8:00 PM, at the Hillis, Combs & Nestor Funeral Home, 935 Forest Avenue, Zanesville. Visitation will also be held one hour prior to services from 10:00 to 11:00 AM, on Tuesday, March 5, 2019, where services will follow at 11:00 AM, with Pastor Chris Steel officiating. Burial will follow in Poplar Forks Cemetery with the United States Navy, VFW Post 1058 and American Legion Post 29 conducting full military honors. Memorial contributions may be made to Genesis Hospice & Palliative Care, 713 Forest Avenue, Zanesville, or West Muskingum Academic Fund, 4880 West Pike, Zanesville, OH 43701 in Wendell’s memory. To sign the online register book or to send a personal condolence note please visit www.hilliscombsnestor.com

The family of Wendell R. Ware created this Life Tributes page to make it easy to share your memories.

Send flowers to the Ware family.