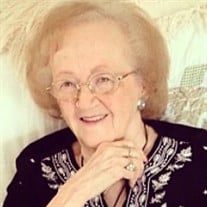 Violet June (Shawger) Fountain, 88, of Zanesville passed away, surrounded by her loving and devoted children, at 10:15 A.M. Tuesday, September 22, 2015 at her home following a battle with Parkinson’s Disease. She was born March 25, 1927 in Muskingum County and was a daughter of the late Helen and Leonard Collopy. She was a graduate of St. Nicholas Catholic High School and a lifetime member of St. Nicholas Catholic Church. June worked at Nicol’s Restaurant for over 25 years. She was a former member of the Daughters’ of Isabella. She was an avid fan of BINGO, playing cards with her children and playing Euchre in her ladies’ club for over 60 years. She is survived by her eight children, Jeff (Kathy) Shawger and their children, Chad and Kyle Shawger and Ashley Jones; Susan Baltzer of California and her children, Monique, Devon and Robyn Baltzer; Nancy Arnold (Jim) and her sons, Ryan and Chase Thomas; John (Bonnie) Shawger and their children Lisa Heins, Stephanie Wilhite, and Jason Shawger; Jim (Marge) Shawger and their children, Mindy Short, Scott and Brad Shawger; Mike (Kelly) Shawger and his sons, Richard and Seth Shawger, Tom (Tara) Shawger and their children Tyler Shawger and Torie Patterson and Molly Haslam (Bob) of California and her children, Jade Helena Garcia and Austin Garcia. She is also survived by her four stepchildren Jamie German and her children, Edie Steil, Kevin German, and Krissy Johnson who was her loving caregiver for three years; Randy Fountain and his children, Amy, Andrea, and Abbey Fountain; and Marty Fountain and his children, Kagnie Anderson, Kylie Fountain and Zach Fountain; and Tammy (Dan) Wiseman and their children, Jeremy and Wesley Wiseman. She has one living brother, Bernard (Lillian) Collopy. She is also survived by 42 great grandchildren as well as many nieces and nephews. She also leaves behind two additional caregivers, Courtney Scaggs and Darla Keiffer. She is preceded in death by her first husband, Richard (Dick) Shawger, who passed in 1976, and her second husband, James Fountain, who passed on September 8, 2015. In addition to her parents, she was also preceded in death by two sisters, Celeste (Sis) Cole and Mary Alice Fitch and her brother, Eugene Collopy and her grandson, Aaron Baltzer who resided in California and a daughter-in-law, Rebecca Fountain. Friends may call Thursday, September 24, 2015 from 2:00 to 4:00 and 6:00 to 8:00 PM, at the Hillis, Combs & Nestor Funeral Home, 935 Forest Avenue, Zanesville, where a Christian Vigil will be held at 7:45 PM. Mass of Christian Burial will be celebrated 10:30 AM, Friday, September 25, at Saint Nicholas Catholic Church, 925 Main Street, Zanesville, with Fr. Martin J. Ralko as celebrant. Burial will follow in Mt. Olive Cemetery. To sign the online guestbook or leave a personal note of condolence please visit www.hilliscombsnestor.com.

Violet June (Shawger) Fountain, 88, of Zanesville passed away, surrounded by her loving and devoted children, at 10:15 A.M. Tuesday, September 22, 2015 at her home following a battle with Parkinson&#8217;s Disease. She was born March 25, 1927... View Obituary & Service Information

The family of Violet June (Shawger) Fountain created this Life Tributes page to make it easy to share your memories.