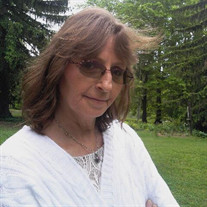 Vicki Sue Tracey Tetak, age 53 of Zanesville, died 9:17 AM, Wednesday, March 6, 2019 at Genesis Morrison House Hospice in Zanesville after a long courageous battle with cancer. She was born Tuesday, August 10, 1965 in Zanesville, the daughter of Mary (Soller) Tracey and the late Scott Lee Tracey. She was married on Friday, May 18, 2018 to David Michael Tetak of the home. Also surviving is one son Christopher Stotts of Zanesville and one daughter Nichole Tracey of Columbus; two grandchildren, Bud and Cassidy; four brothers and sisters, Jeff Tracey, Don (Sue) Tracey, Peggy Taylor of Zanesville and Gary Tracey all of Zanesville , several nieces and nephews and loving pet Susie and Miss Kitty. In addition to her father she was preceded in death by one son Kenny “Bud” Tracey. She enjoyed cross stitch, working outside and her horses. She was a loving wife, mother and daughter and will be greatly missed by all who knew her. In keeping with Vicki’s wishes an informal and casual visitation will take place from 6:00 PM to 8:00 PM on Friday, March 8, 2019 at the Hillis, Combs & Nestor Funeral Home, 935 Forest Avenue, Zanesville. A funeral service will be held 11:00 AM on Saturday, March 9, 2019 at the funeral home with Fr. Martin Ralko officiating. Burial will conclude in the Mount Olive Cemetery Zanesville In lieu of flowers donations may be made in Vicki’s honor to the Genesis Morrison House Hospice. To sign the online register book or to send a personal condolence note please visit www.hilliscombsnestor.com.

The family of Vicki Sue Tetak created this Life Tributes page to make it easy to share your memories.

Send flowers to the Tetak family.