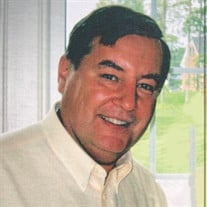 Vance passed away peacefully at Morrison House in Zanesville, OH on December 22, 2021. He was born Thursday, August 19, 1943 in Niagara Falls, NY the son of Walter Skowronski and Stella B. (Czechowski) Skowronski. He is survived by the love of his life Lynne (Butler), whom he married on Saturday, February 2, 1974. Vance was adventurous and curious to learn new things. In college, he participated in sports and recreational activities. He was a graduate of the University of Dayton and retired from Wright -Patterson AFB as an Electrical Engineer after 37 years. As a young man, he obtained his pilot license to travel and was an avid reader in history and science. A father, Vance was active in the Boy Scouts of America, serving as Scout Master for many years. His pastime was spent researching and enjoying trains, specifically the N Gage model, and combining this interest with photography. He always had a camera in his hand. As a point of pride, Vance purported to remember every meal he had ever eaten in his 78 years of life. With his Boy Scout training, he was always prepared and if asked, could offer any tool from his car, camping equipment from the barn, or his two cents on any subject. Vance also took fashion cues from no one and seemed to always have a lottery ticket in his pocket. He was a wonderful husband, father, and grandfather and loved spending time with his family. Vance was one of the four original members of the Great Lakes Exploration Group LLC. He was a vital part of the group’s successful forty-year search in the discovery of the Great Lakes first shipwreck, “Le Griffon,” the flagship of French explorer Robert La Salle lost in 1679. Their story of discovery is chronicled in the recently published book, Le Griffon and the Huron Islands, 1679. He had extreme pride in his surviving sons Michael (Carrie) of Zanesville, OH and Ryan (Ashley) of Lima, OH. He is survived in legacy by his six grandchildren: Kameron, Logan, Dylan, Madison, Alivia, Maddox and one brother, Dennis (Nancy) Skowronski of Farmington Hills, MI and a large extended family who will miss his contagious smile and presence dearly. A celebration of life service will be held at 1 PM on January 8, 2022 at the Hillis Combs & Nestor Funeral Home, 935 Forest Avenue in Zanesville. The family would like to thank the medical team at Genesis Hospital in Zanesville and the staff of Morrison House for their loving care and respect for the family. In lieu of flowers, the family asks that donations be made to Genesis Hospice Care, 713 Forest Ave., Zanesville, OH 43701 or St. Nicholas Catholic Church, 925 E Main St., Zanesville, OH 43701.

Vance passed away peacefully at Morrison House in Zanesville, OH on December 22, 2021. He was born Thursday, August 19, 1943 in Niagara Falls, NY the son of Walter Skowronski and Stella B. (Czechowski) Skowronski. He is survived by the love... View Obituary & Service Information

The family of Vance Dwight Skowronski created this Life Tributes page to make it easy to share your memories.

Vance passed away peacefully at Morrison House in Zanesville,...

Send flowers to the Skowronski family.