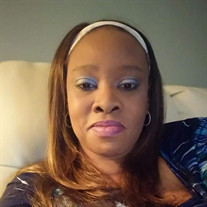 Thristina A. (Glaze) Allen, better known as Trish, passed away January 3, 2020 peacefully in her home surrounded by family after a short illness. Thristina was born June 24, 1978, in Zanesville, Ohio to Kandice (Glaze) Drake and Clint Harrison. She was raised and loved deeply by James Harris and Jody Drake. She married Kurtis Allen on July 10, 1999. They had three amazing children, Tanisha, Marquis, and Kiara. She worked for Genesis Health Care Systems for over 14 years. Thristina was a 1997 graduate of Zanesville High School. Thristina was a member of the Zanesville High School choir and the barbershop quartet. Thristina was the first grandchild born in the Glaze family of 100 plus who were known as the Glaze donut holes. This includes grandchildren, great grandchildren, and great-great grandchildren. Thristina had an outgoing personality, with an infectious laugh, and a warm smile. Anyone that ever had the privilege to meet or know Thristina were touched by her. Thristina is survived by her grandmother, Lucile Glaze, her mother, Kandice (Glaze) Drake, father figures, Clint Harrison (Sakandrail), James Harris, and Jody Drake, two brothers, Ian (Heather) Harris (who she referred to as her little big brother), Joel Drake, two sisters, Elizabeth Dewees who took care of Thristina in the final days, and Lashonda (Rod) Davis. Thristina also leaves behind her three children, Tanisha Glaze, Marquis Glaze, and Kiara Allen. A grandchild she loved with her entire heart, Adrian Riley. A special aunt to be honored is Shawnee Glaze. Shawnee and Trish grew up more like sisters rather than an aunt and niece relationship. No two people were tighter than those two. One great aunt Mary Floyd. She has many aunts, uncles, cousins, nephews, and nieces that now the world will never be the same without Thristina in it. Thristina is preceded in death by her grandfather, John Glaze, and uncles Ricardo and Rejeon Glaze. Thristina attended the Kingdom Hall of Jevohah Witnesses. Her favorite scripture was Revelations 21:4 and her favorite song was, see yourself when all is new (Revelations 21:1-5). The entire family would like to thank the brothers and sisters of the Kingdom Hall for their love and support during this difficult time. Friends may call from 1:00 PM to 3:00 PM on Saturday, January 18, 2020 at the Hillis, Combs & Nestor Funeral Home, 935 Forest Avenue, Zanesville. A funeral service will held at 3 PM on Saturday at the funeral home with Gerald Glaze officiating. To sign the online register book or to send a personal condolence note please visit www.hilliscombsnestor.com.

Thristina A. (Glaze) Allen, better known as Trish, passed away January 3, 2020 peacefully in her home surrounded by family after a short illness. Thristina was born June 24, 1978, in Zanesville, Ohio to Kandice (Glaze) Drake and Clint Harrison.... View Obituary & Service Information

The family of Thristina A. (Glaze) Allen created this Life Tributes page to make it easy to share your memories.

Thristina A. (Glaze) Allen, better known as Trish, passed away...

Send flowers to the Allen family.