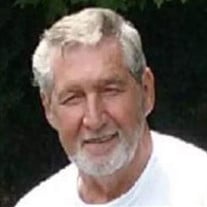 Thomas "Tom" H. Novaria, 73 of Zanesville, passed peacefully into heaven at 12:45 PM, Saturday, November 10, 2018, at Genesis Hospital in Zanesville. He was born Wednesday, December 13, 1944, in Zanesville, the son of Harold Novaria and Dora (Whitehead) Novaria, and married Beverly “Bev” Reed on Saturday, March 4, 1967. Tom was employed with Quick Way Trucking for many years. He enjoyed NASCAR, the Ohio State Buckeyes and the Cleveland Browns. He loved to mow grass and enjoyed gambling; his favorite place to visit was Atlantic City. But most of all Tom loved his family and enjoyed the time he spent with them. Tom is survived by his wife of the home: Bev Novaria, two children: Mindy (Kevin Sees) Novaria and Kevin (Shelly Willey) Novaria; two grandchildren: Shyann Novaria and Cameron Novaria and one great grandson: Carter Novaria and one on the way; one sister: Pat (Mike) Inman and three sisters-in-law. In addition to his parents, Tom was preceded in death by his brothers: Gary, Roger, Dean, Greg, Rick & Dave Novaria. A Gathering of Family and Friends to Celebrate Tom’s Life will be held from 2:00 to 4:00 PM, Saturday, November 17, 2018, at the Hillis, Combs & Nestor, 935 Forest Avenue, Zanesville, where Memorial Services will follow at 4:00 PM, with Chaplin Fr. Rob Morris officiating.

The family of Thomas "Tom" H. Novaria created this Life Tributes page to make it easy to share your memories.

Send flowers to the Novaria family.