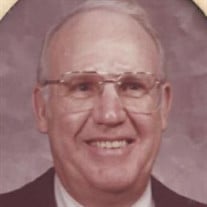 Thomas G. Quinn Sr. got his wings on Monday, November 28, 2016, to take his rightful place in the arms of the architect of the universe. Quinn, 89, passed peacefully at home, surrounded by loved ones. Tom was born on October 28, 1927, in Zanesville, the son of Andrew Francis and Anna Frances (McGonagle) Quinn. He is a 1945 graduate of St. Thomas High School. Tom served his country in the Navy during 1945-1946 on the USS Passumpsic in the Pacific Theater. Quinn was a longtime member of St. Thomas Aquinas Church and served 20 years as the church sacristan and was a member of the 3rd Order Lay Dominicans. He had also worked on behalf of the Boy Scouts, the Knights of Columbus, little league football, St. Thomas Festival, and Zaney Follies. Quinn retired from Armco/AK Steel in 1984 after 38 years of service. Following retirement, Tom and Margaret were devoted volunteers for 20 years for Genesis Hospice. But they are best known for their efforts to help the mentally ill and their families. Tom and Margaret started a local affiliate of the National Alliance on Mental Illness (NAMI) in 2000, serving as president of the group overseeing a 6 county area. Tom conceived the idea of a family band to entertain the mental health community. The subsequent formation of the 14-member "Quinn Family Singers" (consisting of Tom and Margaret's children and grandchildren) and its annual free performance at the "Quinn Family Bash" are now staples in the community. Tom loved to sing and was known to cheer up people having a bad day by serenading them from his deep repertoire of songs. He sang “I Can’t Help Falling In Love With You” daily to his wife, and was a longtime fan of Notre Dame Football and Bing Crosby's music. Tom was the recipient of many awards and recognitions including the Diocesan Service Award from the Dioceses of Columbus, the Bob & Deloris Hope Good Samaritan Award, Muskingum Community Foundation Award, Sertoma Service to Mankind Award and the Legacy of Fatherhood from Forever Dads. He is survived by his wife of 63 years, Margaret (Weber); his children Gretchen (Jeff) Booth of Nashport, Thomas (Susan) Quinn, Jr. of Athens, Carolyn Quinn of Columbus, Paul Quinn of Zanesville, Chuck (Ann) Quinn of Detroit, Francie (Ken) Pendley of Galena, and Patrick Quinn of Zanesville; and many loving grandchildren, nieces, nephews, cousins and friends. Tom, as a 3rd Order Lay Dominican, will Lie in State from 2:00 PM to 4:00 PM, Thursday, December 1, 2016, at St. Thomas Aquinas Catholic Church, where prayers may be offered for the repose of his soul. The Dominican Form of the Rosary will be recited at 3:45 PM by the St. Thomas Aquinas Chapter of Lay Dominicans. Visitation will be held from 5:00 to 8:00 PM on Thursday, at the Hillis, Combs & Nestor Funeral Home, 935 Forest Avenue, Zanesville where a Christian Vigil will be held at 7:45 with family remarks. Mass of Christian Burial will be celebrated 10:00 AM, Friday, December 2, 2016, at St. Thomas Aquinas Catholic Church, 144 North Fifth Street, Zanesville, with Fr. Peter Fagen, OP as Celebrant. Tom will be laid to rest in Mt. Calvary Cemetery with the United States Navy, VFW Post 1058 and American Legion Post 29 conducting Full Military Honors. Memorial contributions may be made to St. Thomas Aquinas Church, 144 N. Fifth St., Zanesville, OH 43701, Genesis Hospice, 713 Forest Avenue, Zanesville, or The National Alliance on Mental Illness (NAMI), Six County Affiliate, 957 Forest Avenue, Zanesville, in Tom’s memory.

Thomas G. Quinn Sr. got his wings on Monday, November 28, 2016, to take his rightful place in the arms of the architect of the universe. Quinn, 89, passed peacefully at home, surrounded by loved ones. Tom was born on October 28, 1927, in Zanesville,... View Obituary & Service Information

The family of Thomas G. Quinn Sr. created this Life Tributes page to make it easy to share your memories.

Send flowers to the Quinn family.