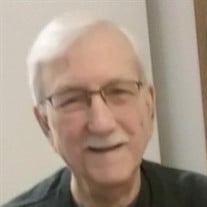 Thomas "Tom" J. Mitchell, Jr. 88 of Zanesville, died 1:52 AM, Wednesday, March 24, 2021, at his home surrounded by his family. He was born Sunday, April 10, 1932 in Conesville, the son of Thomas J. Mitchell, Sr. and Leona (Jennings) Marvin. He married Ruth Ann (Carter) Mitchell on Saturday, October 27, 1951, and was a member of Columbus Bible Church. Tom served his country as a veteran of the United States Army during the Korean Conflict. He was employed with the United States Post Office retiring following over 35 years of service. He was an avid golfer, and a huge sports fan who never missed a game, and was a member of the American Legion Post 29. In addition to his wife of over 69 years: Ruth Ann Mitchell, Tom is survived by three children: Michael (Linda) Mitchell of Nashport, Stephen (Susan Hayes) Mitchell of Powell and Susan Soto of Live Oak, TX; six grandchildren: Lindsay Barnett, Matthew (Lauren) Mitchell, Spencer Mitchell, Sarah Mitchell, Viviana Soto and Antonio Soto; four great grandchildren: Aubree Barnett, Wes Barnett, Hayden Mitchell and Hadley Mitchell. Tom was preceded in death by his parents. A caring cremation will take place and a Memorial Service will be held at a later date. Memorial contributions may be made to Genesis Hospice and Palliative Care, 712 Forest Avenue, Zanesville, OH 43701, in Tom’s memory. To sign the online register book or to send a personal condolence note please visit www.hilliscombsnestor.com

The family of Thomas J. Miitchell, JR. created this Life Tributes page to make it easy to share your memories.