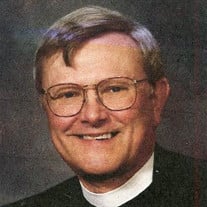 Rev. Terry Thomas Timson 81, of Zanesville, died Friday, December 13, 2019, at Genesis Hospital. He was born May 19, 1938, in Zanesville, the son of Raphael John and Ruby Nancy (Tracy) Timson. He attended public school and after graduation from Zanesville High School in 1957, attended Maryville College in Maryville, Tennessee for one year. He received his A.B. Degree from Ohio University in English and History in 1962, and his M. Div. Degree from The Theological Seminary of The University of Dubuque in Dubuque, Iowa in 1966. He took additional post-graduate work at McCormick Theological Seminary in Chicago and Seabury-Western Theological Seminary in Evanston, Illinois. He received his Doctor of Ministry Degree from International Seminary in 1980. Rev. Timson was ordained into the Holy Ministry by the Presbytery of Freeport on June 54, 1966, in the First Presbyterian Church of Rockford, Illinois. He served as Associate Pastor of First Presbyterian Church, Freeport, Illinois for 7 ½ years from 1966-1973. In 1973, he became Pastor of The Lima Presbyterian Church in Howe, Indiana and served there for 10 ½ years retiring in 1984, because of serious heart problems. He became Pastor Emeritus of Lima Church upon his retirement, the first pastor to be so designated in the 170 year history of the congregation. For 14 years he was a part-time member of the faculty of Hoe Military School in the Guidance Department. He also served as part-time Supply Pastor of Garrett Presbyterian Church in Garrett, Indiana and part-time Temporary Supply Pastor of First Presbyterian Church, Newcomerstown, Ohio and part-time Temporary Supply Pastor of the New Lexington and Roseville, Ohio Presbyterian Churches. Rev. Timson was in International Preacher in Belfast, Northern Ireland in 1968. He was also a commencement speaker at several high schools through the years. He served as a member of the Board of Directors for the Visiting Nurses Association of Freeport, Illinois, The Green Hills Girl Scouts Board, Freeport, and the C.R.O.P. Board, Freeport, Illinois. He was also a member of Freeport Rotary Club, and served on several committees in Presbytery. Rev. Timson had been a member of Alpha Phi Omega Fraternity, Kappa Phi Society, The Freeport Country Club and LaGrange Country Club. He also belonged to Ministerial Associations in Freeport and Lagrange County. In LaGrange County he was a member of the Board of The Will Child Clinic, The LaGrange County Cancer Society and Board of Directors of La Grange County Council on Literacy. Rev Timson also served as Vice President of the Board of Directors of the Northeastern Mental Health Center, Kendallville, Indiana. He was elected to Indiana Academic All-Stars in recognition of Outstanding Contributions to the Education of Indiana Young People by The Indianapolis Star and News, Indiana Completions for Excellence Indiana Department of Education in 1996. He was elected to Who’s Who Among American High School Teachers for three years, 1999, 2000 and 2005. He had also been a member of the American Association of College Admissions Councilors and Indiana Association of College Admissions Counselors. He also had the Howe Military Yearbook dedicated to him on two occasions. Rev. Timson became an Honorary Alumnus of Howe Military School in 1994 and was a member of The Old Guard. Rev. Timson also served on their Advisory Board of Horizon Science and Nobel Academies, Columbus, Ohio. Rev. Timson’s love of travel took him to Europe and the Middle East over 50 times through the years. He was an avid reader and enjoyed Historical Novels most especially. He was preceded in death by his parents and his beloved sister: Evelyn Ruth Tague Drake and his brother: Paul Frederick Tague; two nephews: Charles Winston Drake and Paul Thomas Drake; two nieces: Tibby Drake and infant Nan Drake. He is survived by his nieces LeeAnn Drake (Ralph) Hiles of Zanesville; Darla Dee Drake (Dr. Carl) Dodson of Zanesville; nephews Michael L. (Dr. Virginia) Drake of St. Louis, MO., James K. (Annette) Drake of Zanesville; great nieces Heather (Scott) Lawler of Dresden; Heidi (Mark) Church of Zanesville; Anissa Hiles of Zanesville; Dr. Wendy (William) Barton of Naples, Florida; Christy (Al) McCallum of Simpsonville, South Carolina; Melissa (Donald) Feasal of Lewis Center; Cindy (Bryan) Hysell of Carroll; Matthew (Michelle) Drake of Ballwin, Missouri; Dr. Michael Drake (Rebecca) of Columbia, Missouri; Shauna (Matt) Kelly of Brownsville; great, great nieces Cortney Hiles, Samantha Lawler and Hope Drake and Brooklyn Drake Great, great nephews Kyle Church, Jacob Lawler, Colton Mettler, Jacob and Jeremy Drake. Also, former students who were like his own sons: Michael Scott Huard of Ann Arbor, Michigan, Sven H. (Nancy) Eikmeier of Abu Dhabi U.A.E., and Jonathan E. MacKay of9 Indianapolis, Indiana. A cremation has taken place and a Memorial Service will be held at a later date. To sign the online guestbook or leave a personal note of condolence please visit www.hilliscombsnestor.com.

Rev. Terry Thomas Timson 81, of Zanesville, died Friday, December 13, 2019, at Genesis Hospital. He was born May 19, 1938, in Zanesville, the son of Raphael John and Ruby Nancy (Tracy) Timson. He attended public school and after graduation from... View Obituary & Service Information

The family of Rev. Terry Thomas Timson created this Life Tributes page to make it easy to share your memories.

Send flowers to the Timson family.