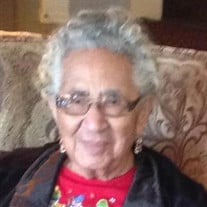 Sylvia Elizabeth Anderson Barber was born on December 8, 1919 in Rendville, Ohio. She went home to live with God at 11:55 AM Friday, July 15, 2016 in Surprise, Arizona. During her travels she attended several different churches. She was a member of the Wings of Hope Tabernacle Church in Zanesville, Ohio several years. While there she was a member of the Ladies Circle, a Sunday School teacher, and member of the choir. She was a charter member of a new church, The Hands of Faith, which she named. While in Berea, Ohio, she was a member of People’s Community Church and later attended Palm Vista Baptist Church in Surprise, Arizona. She was married to William Sidney Barber for 69 years. He preceded her in death on October 13, 2009. They were the parents of three children—Alberta, Wilma and William. Mr. Barber, who was in the military twelve years and attained the rank of Chief Warrant Officer, took her and the girls with him as he was assigned overseas and to eleven states in the U.S. Mrs. Barber was a member of the Blue Star Mothers and the Daughters of Elks while in San Francisco, California. The Barbers had 21 foster children over a period of 31 years. She served as a foster grandmother for 10 years at the Zanesville YWCA and was a Community Center mother for 10 years. She also worked at the Hoover Plant and the Egg Plant in Zanesville. She was the oldest of twelve children. She was preceded in death by her two brothers, William Anderson and Raymond Anderson and six sisters, Lillian Newman, Blanche Holbert, Evelyn Ragland, Martha Smith, Gertrude Goins and Youlanda Brunston. Her survivors include her sisters, Beatrice Ross and Vivian Anderson; her children Alberta (Curtis) Gooden, Wilma (Leo) Norris and William (Cynthia) Barber; nine grandchildren; nine great grandchildren; one great great grandchild and a host of other relatives and friends. Sylvia’s greatest of all contributions was her guidance and nurturing not only of her children and grandchildren, but also of so many others. Friends may call Wednesday, July 20, 2016 from 10-11AM at the Hillis Combs & Nestor Funeral Home, 935 Forest Ave. Zanesville. A funeral Service will be held on Wednesday at 11 AM at the funeral home with Rev. Terry F. Newman officiating. Burial will conclude in Woodlawn Cemetery in Zanesville. To sign the online register or leave a condolence please visit www.hilliscombsnestor.com.

Sylvia Elizabeth Anderson Barber was born on December 8, 1919 in Rendville, Ohio. She went home to live with God at 11:55 AM Friday, July 15, 2016 in Surprise, Arizona. During her travels she attended several different churches. She was a member... View Obituary & Service Information

The family of Sylvia Elizabeth Barber created this Life Tributes page to make it easy to share your memories.

Send flowers to the Barber family.