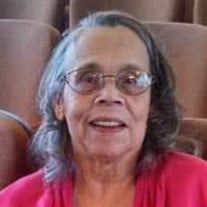 Sharon Lee Mayle, 74 of Zanesville, died, Saturday, February 1, 2020, at her home following a lengthy illness. She was born Tuesday, March 13, 1945, in Zanesville, the daughter of Willis Stevens and Ethel (Needham) Stevens and was a member of Baker Street Church of God. Sharon was previously employed at the Mark Rest Center in McConnelsville, retiring in 1990, following many years of service. During her illness Sharon was cared for by her daughter, Karen, for over thirteen years. She had many visitors of whom Barbara Myers and Steven Walker were faithful. Sharon gave her heart to the Lord in 2009, and loved to speak about him to whoever would listen. She was an avid quilter, and loved to play Yahtzee, Rummy and Scrabble. She greatly enjoyed spending time with all her family and would light up when she saw them. She had an especially close bond with her son-in-law, Nathan Hill. Sharon is survived by three daughters: Tonia Jill (Rick) Mayle, Wendy (Nathan) Hill and Karen (Mike) Walker all of Zanesville; two sons: Michael (Felicia) Croston of Philo, and Richard (Tracey) Mayle, Jr. of Zanesville. fifteen grandchildren; nine great grandchildren; four sisters: Gloria (Bob) Mayle of Chesterhill, Starla Stevens and Margaret Anderson both of Zanesville, and Tina Hill of Columbus; one brother: Teddy (Sheila) Stevens of Akron, and numerous nieces and nephews. In addition to her parents Sharon was preceded in death by her first husband: Daniel “Danny” Croston; her second husband: Richard Lee Mayle; one grandson: Garrett Boyer; four brothers: Stewart Stevens, Jim Stevens, Leroy Stevens and Larry Stevens; and one sister: Carolyn Walker Friends may call 2:00 to 4:00 and 6:00 to 8:00 PM, Thursday, February 6, 2020, at the Hillis, Combs & Nestor Funeral Home, 935 Forest Avenue, Zanesville. Visitation will be also held Friday, February 7, 2020, from 11:00 AM till 12 Noon at Baker Street Church of God, 718 Baker Street, Zanesville, with services to follow at noon with Pastor Lenard Hill, Jr. officiating. Private Committal Services will take place at a later date in Woodlawn Cemetery. To sign the online register book or to send a personal condolence note please visit www.hilliscombsnestor.com

Sharon Lee Mayle, 74 of Zanesville, died, Saturday, February 1, 2020, at her home following a lengthy illness. She was born Tuesday, March 13, 1945, in Zanesville, the daughter of Willis Stevens and Ethel (Needham) Stevens and was a member of... View Obituary & Service Information

The family of Sharon Lee Mayle created this Life Tributes page to make it easy to share your memories.

Send flowers to the Mayle family.