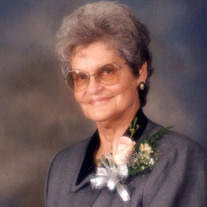 Ruth Evelyn McGonagle, 88, of Zanesville, died 12:40 PM, Thursday, November 14, 2019, at Genesis Hospital in Zanesville. She was born Sunday, February 15, 1931, in Zanesville, the daughter of Herman Haessler and Esther (Gille) Haessler. She was married to Leo McGonagle, who preceded her in death in 1993, and worked alongside him in his contracting business for many years. She was a member of Norval Park Church of Christ and a former member of Immanuel United Church of Christ. She enjoyed playing cards, cross-stitch, sports, was an avid canner with her three daughters, and their weekly get-togethers with her family and friends. She dearly loved her children, grandchildren, great grandchildren and great-great granddaughter. She is survived by three daughters, Linda (Jim) Strouse, Karen (Royce) Browning and Cathy (Kendall) Sands, all of Zanesville; one brother, Carl Haessler, grandchildren, Greg (Kim) Strouse, Beth Curl, Melodie (Vince) Tolson, Andrew (Kim) Browning, Renee (Gerald) Morgan, Michael (Terri) Strouse, Brian Sands, Kelly (Bryan) Wright, great grandchildren, Derek and Alex Strouse; Alaina and Aleigha Curl, Kayla Tolson, Emma and Jack Palko, Ryin, Marcus, and Lincoln Browning, Aayla, and RaShawn Mayle, Braxton Morgan, Cady and Ryan Strouse, Ethan, Josie and Asher Wright, great-great granddaughter, Ellie Douak and several nieces, nephews and cousins. In addition to her parents and husband, she was preceded in death by one son, Mark, in 1984, sisters-in-law, Helen Wallace, Mary McGonagle, Ann Ries and Alice McGonagle. The family would like to thank the caring staff at Genesis Hospice, CCU and 3-West. Also, the staff and her friends at Clay Gardens for their kindness and care over the last year and a half. Donations may be made in her name to St. Jude Children’s Hospital, 262 Danny Thomas Place, Memphis, TN 38105 or the Muskingum County Animal Shelter, 1430 Newark Rd, Zanesville, OH 43701. Friends may call from 5 to 8PM on Monday, November 18, 2019, at the Hillis, Combs & Nestor Funeral Home, 935 Forest Avenue, Zanesville, OH. A funeral service will be at held at 11:00 AM on Tuesday, November 19, 2019, at the funeral home with Evangelist Keith Kress officiating. Burial will conclude in the Zanesville Memorial Park. To sign the online register book or to send a personal condolence note please visit www.hilliscombsnestor.com.

The family of Ruth Evelyn McGonagle created this Life Tributes page to make it easy to share your memories.

Send flowers to the McGonagle family.