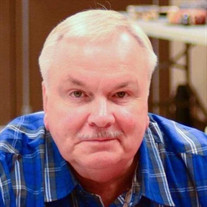 Robin Earl Davis, 70, of Zanesville, died 8:52 PM, Sunday, February 10, 2019, at Genesis Morrison House Hospice. He was born March 19, 1948, in Zanesville, the son of Richard and Mary Fadra (Cason) Davis. He married Patricia “Patty” (Walker) Davis on June 27, 1970, at Fort Carson, CO and was a member of First Baptist Church of South Zanesville. Robin served his country as a Veteran of the United States Army retiring in October of 1986. While in the Army he served two tours during the Vietnam War and was awarded the Bronze Star. He was a member of VFW Post #1058, where he served on the Firing Squad; a Member of the Muskingum County Veterans Hall of Fame; was a Life Member of Am Vets and a member of American Legion Post #29. Robin also worked for Crawford Tech Services where he was awarded the Humanitarian award for civil service for his heroic act of bravery saving another life. Robin also retired from the Ohio Department of Jobs and Family Services where he served as the Eastern Ohio Veterans representative; and received multiple awards for being the Local Veterans Employment Representative of the Year. Robin continued to serve his community through Meals on Wheels and was instrumental in developing the Angels on Wheels program. You could always find Robin at Walmart talking with a local veteran that he has helped. In addition to his wife: Patty, Robin is survived by one son: Bruce and "Susan" Supatra Davis of Moses Lake, Washington; grandchildren: Brucie & Larry both of TN, Dominique, Deonte’, Xander & Cameron all of Washington and Scotty and Karlie of TN; great grandchildren: Ricky and Allison; brothers and sisters: Jerry Davis of Zanesville, Phyllis Davis of Waynesville, Gary Davis of Zanesville and Karen Holbein of Zanesville and several nieces and nephews: special brothers: Garland "Red" Giddings of Coushatta, La and James Shafer of Zanesville, a special sister-in-law: Carol Stone of Zanesville, a special daughter: Brenda Perkins of Clarksville, TN, an honorary pallbearer Burt Baldwin of Pennsylvania. Fur baby: Riggs of Zanesville. Friends may call from 2-4PM and 6-8PM Monday, February 18, 2019 at the Hillis, Combs & Nestor Funeral Home, 935 Forest Ave, Zanesville. Funeral Services will be held 11:00 AM Tuesday, February 19, 2019, at the funeral Home with Rev. David W. Nuhfer officiating. Burial will conclude in the Woodlawn Cemetery, Zanesville where the United States Army, VFW Post #1058 and American Legion Post #29 will conduct full Military Honors. To sign the online register book please visit www.hilliscombsnestor.com.

The family of Mr. Robin Earl Davis created this Life Tributes page to make it easy to share your memories.

Send flowers to the Davis family.