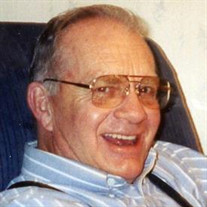 Rev. Robert F. Williamson, 84, of Zanesville, passed away peacefully at his home 12:45 AM, Tuesday, May 9, 2017. He was born Friday, March 17, 1933, in Zanesville, the son of Francis F. Williamson and Beulah (Welch) Williamson. He was married on Saturday, September 8, 1956, to Sharon (Valentine) Williamson who survives. Robert was a Methodist by faith and served in the United States Army for 8 years during the Korean War. Following the military he was a lieutenant for the Zanesville Police Department for over 16 years. He graduated from Garrett Theological Seminary and Steubenville Franciscan University and was a United Methodist Minister where he was an associate pastor for 20 years. Over his tenure, he served the United Methodist churches of Winterset, Antrim, Freeport, Smyrna, Winchester, Harmony and Adamsville. In addition to his wife, he is survived by three sons: Robert David (Connie) Williamson of Jersey Village, TX, Randy (Sharon) Williamson of New Philadelphia, OH and Craig (Jenny) Williamson of Las Vegas, NV; and one daughter: Kelly (Tom) Ellis of Conway, SC; 9 grandchildren, 15 great grandchildren; one sister: Rhea Brock of Zanesville and several nieces and nephews. In addition to his parents, he was preceded in death by seven sisters. Friends may call from 4:00 PM to 8:00 PM on Thursday, May 11, 2017 at the Hillis, Combs & Nestor Funeral Home, 935 Forest Avenue, Zanesville, A funeral service will be held 1:00 PM on Friday, May 12, 2017, at the funeral home with his eldest grandson, Rev. Jeremiah Williamson officiating. Burial will conclude in the St. Paul Cemetery Zanesville, where The United States Army, VFW Post 1058 and American Legion Post 29 will conduct full military honors. To sign the online register book or to send a personal condolence note, please visit www.hilliscombsnestor.com.

Rev. Robert F. Williamson, 84, of Zanesville, passed away peacefully at his home 12:45 AM, Tuesday, May 9, 2017. He was born Friday, March 17, 1933, in Zanesville, the son of Francis F. Williamson and Beulah (Welch) Williamson. He was married... View Obituary & Service Information

The family of Rev. Robert F. Williamson created this Life Tributes page to make it easy to share your memories.

Send flowers to the Williamson family.