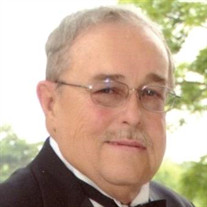 Robert J. Swope, age 81, of Zanesville, OH passed peacefully on Monday, June 11, 2018. Robert was born on July 20, 1936 in Zanesville to Wendell and Sarah (Russell) Swope, brother to Jenilee and Susan. A 1954 graduate of Zanesville High School, he was a member of the golf team and attended Ohio Wesleyan University for his Bachelor’s in chemistry in 1958. At Ohio Wesleyan, he was active on the golf and JV football teams and a member of Sigma Chi fraternity. Robert was an American Physical Science Laboratory Administrator with achievements of research in contamination control, aerospace fluids, aerospace material characterization and has named significant contributions at the Charles Stark Draper Laboratory, Inc., (Boston). He worked as a Chemist of Laboratory Physical Sciences with Pacific Resins (Newark, OH); civilian Chief Chemist for Aerospace Guidance and Metrology Center (Newark, OH); and the Director of Quality Control with Boeing (Newark, OH). He was a Fellow of the American Institute of Chemists, a member of American Chemical Society and the Coblentz Spectroscopy Society. Robert was a proud member of the Army Reserve, Central Presbyterian Church and an avid supporter of Zanesville Civil War Roundtable, the Ohio Wesleyan golf team and enjoyed his love for golf at the Zanesville Country Club. He is preceded in death by his parents, Wendell and Sarah (Russell) Swope and sister Jenilee Roberts. He will be missed by his wife of 57 years, Mary (Gerber) Swope of Zanesville, OH; daughter, Erin Swope Votaw and husband Trent Votaw of Greensboro, NC; Grandsons Lucas Kendall Votaw and Benjamin Russell Votaw of Greensboro, NC; sister, Susan Cooper and husband Donald Cooper of Lexington, OH and family; nephews Dr. Jay and Dr. Richard Gerber of WV along with extended loving family. A memorial service and celebration of his life will be held 10:00 AM, Sunday, August 12, 2018, at the Zanesville Country Club. Donations may be made in his name to the Zanesville Animal Shelter Society, 1430 Newark Road, Zanesville, Ohio 43701.

The family of Robert J. Swope created this Life Tributes page to make it easy to share your memories.

Send flowers to the Swope family.