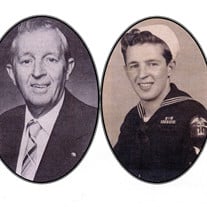 Robert Foster "Bob" Strickler, 89 of Zanesville, died 9:30 PM, Saturday, March 19, 2016 at Mt. Carmel East Hospital in Columbus. He was born Friday, February 25, 1927 in Smithfield, the son of Jacob Strickler and Mary (Shoneck) Strickler. He married Eileen E. (Gerst) Strickler on Monday, April 14, 1952 and was a member of St. Nicholas Catholic Church. Bob served his country as a veteran of the United States Navy during WWII. Bob served in the European Campaign and was in Normandy. He was a graduate of Smithfield High School and attended Youngstown State & The Ohio State University. He retired from the Internal Revenue Service as a Revenue Agent following 36 years of service. Bob was a life member of the VFW and a former member of the Toastmasters International. He was a long time member of the United Commercial Travelers where he served as Grand Secretary for the State of Ohio for six years. After retirement he was a volunteer Tax Aide Coordinator for AARP, helping seniors with income tax returns. He also enjoyed golf and was a member of several golf leagues over the years. Bob was an avid Ohio State Football Fan Bob is survived by his wife of over 64 years; one son: Alan Strickler of Cleveland; daughter: Mary Jane (Mark) Herman of Bexley; three grandchildren: Lauren McCoy of Cleveland, Tyler McCoy of Pullman, WA and Miles McCoy of Zanesville; one step-grandchild; Michael Herman of Royal Oak, MI. In addition to his parents, Bob was preceded in death by one step-grandson: Sean Herman; one brother: James Strickler and four sisters: Magda Bell, Doris Tarr, Kathleen Strickler and Ruth McCain. Friends may call from 2:00 to 4:00 & 6:00 to 8:00 PM, Tuesday, March 22, 2016 at The Hillis, Combs & Nestor Funeral Home, 935 Forest Avenue where a Christian Vigil will be held at 7:45 PM. Mass of Christian Burial will be celebrated 10:30 AM, Wednesday, March 23, 2016 at St. Nicholas Catholic Church, 955 Main Street, Zanesville. Bob will be laid to rest in Mount Olive Cemetery with the United States Navy and VFW Post 1058 conducting full military honors. To sign the online register book or to send a personal condolence note please visit www.hilliscombsnestor.com

The family of Robert "Bob" Foster Strickler created this Life Tributes page to make it easy to share your memories.

Send flowers to the Strickler family.