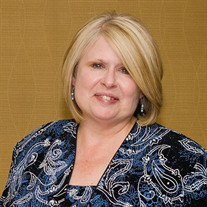 Rita Jane Hecker, 60, of Columbus, Ohio, died at 5:04 p.m. on Friday, April 13, 2018, at The Ohio State University Wexner Medical Center in Columbus after a brief illness. She was born Aug. 31, 1957, in Zanesville, the daughter of Waverly F. Tyson and Mary Anne Goelz. Rita, a former member of St. Thomas Aquinas Catholic Church, was a 1975 graduate of Bishop Rosecrans High School and earned an associate’s degree from Muskingum Area Technical College, after which she worked for a time in a Zanesville law office. She was a longtime employee of Hancock Fabrics in Columbus and most recently worked at the Southeast Branch of Columbus Metropolitan Library. Rita was a superb seamstress, crocheter and quilter, an outstanding cook, a devoted gardener and a superlative baker known especially well for her colossally creative birthday cakes and the platters of homemade treats she gave away each Christmas Eve. This sweet, gentle, wise woman was loved and appreciated for her beautiful smile, ingratiating laugh, sparkling wit and compassionate concern for all. Those who knew her can confirm that she was the greatest wife, mother, sibling and friend a person could have. The world has lost one of our stellar citizens, but Heaven is all the richer. Rita is survived by her husband, Robert K. Hecker, whom she married in June 1984; six children, Rita (Jason) Dorstewitz of Columbus, Greg (Kati) Hecker of Erie, Pa., Tim (Jordan) Hecker of Cleveland, and Rachel, Robin and Rebecca Hecker, all of Columbus; three grand-daughters, Lia, Margot and June Hecker of Cleveland; a sister, Mary (David) Daugherty of Dayton, Ohio; four brothers, Ron (Linda) Tyson of Florida; Michael Tyson of Canton, Ohio; Waverly (Cindy) Tyson of South Bend, Ind., and John (Kim) Tyson of Heath, Ohio; and numerous nieces and nephews. She was preceded in death by her parents. Friends may call from 4:00 PM to 8:00 PM on Friday, April 20, 2018 at the Hillis, Combs & Nestor Funeral Home, 935 Forest Avenue, Zanesville, OH. A Funeral Mass will be celebrated at 1:30 PM on Saturday, April 21, 2018 at St. Thomas Aquinas Catholic Church 144 North Fifth Street, Zanesville with Fr. Jan C.P. Sullivan as celebrant. Burial will conclude in the Mount Olive Cemetery Zanesville. To sign the online register book or to send a personal condolence note please visit www.hilliscombsnestor.com.

Rita Jane Hecker, 60, of Columbus, Ohio, died at 5:04 p.m. on Friday, April 13, 2018, at The Ohio State University Wexner Medical Center in Columbus after a brief illness. She was born Aug. 31, 1957, in Zanesville, the daughter of Waverly F.... View Obituary & Service Information

The family of Rita Jane Hecker created this Life Tributes page to make it easy to share your memories.

Send flowers to the Hecker family.