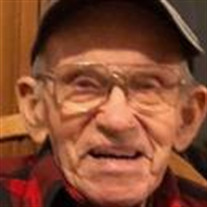 Richard W. Paul, age 92, of Zanesville, died, Wednesday, October 14, 2020 at his home in Zanesville, OH. He was born Saturday, October 29, 1927, in Zanesville, the son of Roy P. Paul and Florence (Leddy)Paul. Richard served our country and protected our freedom as a Corporal in the United stated Army during the Korean Conflict. He was a dedicated and faithful member of St. Nicholas Catholic Church and was a member of the Knights of Columbus #505. In Richard's early years he worked in the family coal mine, later he ran, maintained, and spent years of devotion to the family farm until the day of his death. Richard is survived by his two brothers, Eugene (Jeanne) Paul, and James (Katherine) Paul, one sister, Rita (James) Burkhart, a sister-in-law, Margaret Paul and he was especially close to his two nephews, Terence (Christine) Paul and Patrick (Karen) Burkhart and had many nieces, nephews and great nieces and great nephews. In addition to his parents he was preceded in death by one brother, Thomas Paul and two sisters, Virginia (Charles) Elmore and Marjorie (Jack) Connell. Friends may call from 6:00 PM to 8:00 PM on Wednesday, October 21, 2020, at the Hillis, Combs & Nestor Funeral Home, 935 Forest Avenue, Zanesville. A Christian Vigil will take place 7:45 PM, Wednesday October 21, 2020. A Mass of Christian Burial will be held 10:30 AM on Thursday, October 22, 2020, at St. Nicholas Catholic Church, 1020 East Main Street, Zanesville, with Fr. Martin Ralko as celebrant. Burial will conclude in the Mount Olive Cemetery where VFW Post #1058 and American Legion Post #29 will conduct full military honors. To sign the online register book or to send a personal condolence note please visit www.hilliscombsnestor.com

Richard W. Paul, age 92, of Zanesville, died, Wednesday, October 14, 2020 at his home in Zanesville, OH. He was born Saturday, October 29, 1927, in Zanesville, the son of Roy P. Paul and Florence (Leddy)Paul. Richard served our country and... View Obituary & Service Information

The family of Richard W. Paul created this Life Tributes page to make it easy to share your memories.

Send flowers to the Paul family.