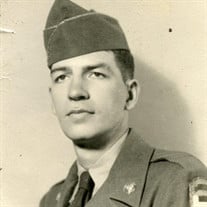 Richard E. (Dick) Dillon passed away peacefully at his home on Friday, October 6, 2017, following a brief illness. He was born February 15, 1929 in Zanesville, as son of the late Lawrence and Margaret (Spaulding) Dillon. Richard had a deep love for his family and for his country. He served in the Ohio State National Guard during World War II. Following his service in the National Guard, he volunteered to join the Army at the young age of 17. Richard was sent to Fort Campbell, Kentucky where he completed his basic training and became a proud member of the 802nd Army Engineers. When the Korean War escalated, the call came for volunteers to be deployed to the war zone. Richard answered the call and was sent to Suwon, Korea in 1952. While there he operated heavy equipment and was instrumental in building the K-13 Airfield Jet Base which served to transport military units and needed supplies to our men on the battlefield. While in the military, he was promoted to the rank of Staff Sergeant and earned several honors, including the Bronze Star for contributions made during the Korean War. Following his years in the military, Richard returned to Zanesville and was married to the love of his life for 63 years, Irene Huffman, who preceded him in death on April 6, 2016. Richard was retired from Rockwell International in Heath, Ohio. He was a proud member of the VFW Post #1058, the American Legion Post#29, Honor Lodge Free and Accepted Masons of Ohio, Valley of Cambridge Scottish Rite, the Amrou Grotto, and St. Nicholas Catholic Church. Richard loved spending time with his family and friends, reminiscing about his days in the military and visiting Amish Country with his sister and best friend, Susie. Richard is survived by his loving children: Jack (Sue Palmer) Dillon, Marianne (Loren) Bates, Shirley (Dan) Knox, Steve (Judy Tolley) Dillon, and a special son, Trent (Cheryl) Ankrum. He was very proud of his grandchildren: Matt Dillon, Brad (Rachel Martin) Dillon, Trent (Jamie) Dillon, Ryan (Jodie) Bates, Andrea (Jon) Arnold, Kolby Knox, Stephen (Sarah Hamilton) Knox, Katie (Ryan) LaFleur, and Jordan Dillon. He was blessed with seven great-grandchildren: Aubree, Oakie, Harper, Piper, Graham, Ava Irene, Finley and one great-grandchild on the way. Richard is also survived by three sister: Susan (Thurman) Harmon, Billie Berry, and Janie DeLany; one brother, Jim Dillon, and several beloved nieces and nephews. He had many wonderful friends and neighbors, including the Herron’s, Wolfe’s, Brun’s and Taylor/Swope’s. In addition to his parents and wife, Richard was preceded in death by three sisters: Dorothy George, Shirley Dowell and Marilyn Sagle. The family will receive friends from 5:00 to 8:00 p.m. Sunday, October 8, 2017 at the Hillis, Combs & Nestor Funeral Home, 935 Forest Avenue, where a Christian Vigil will be held at 7:45 p.m. Mass of Christian Burial will be celebrated at 10:30 a.m. Monday, October 9, 2017 at St. Nicholas Catholic Church, 925 East Main Street, Zanesville, Ohio with Fr. Martin Ralko as celebrant. Burial will follow in Memorial Park Cemetery where the US Army, VFW Post #1058, and the American Legion Post #29 will conduct full military honors. Memorial contributions may be made in Richard’s name to Genesis Hospice & Palliative Care, 713 Forest Avenue, Zanesville, Ohio 43701 or to the VFW Post #1058, 1318 Putnam Avenue, Zanesville, Ohio 43701.

Richard E. (Dick) Dillon passed away peacefully at his home on Friday, October 6, 2017, following a brief illness. He was born February 15, 1929 in Zanesville, as son of the late Lawrence and Margaret (Spaulding) Dillon. Richard had a deep... View Obituary & Service Information

The family of Richard E. "Dick" Dillon created this Life Tributes page to make it easy to share your memories.

Richard E. (Dick) Dillon passed away peacefully at his home on...

Send flowers to the Dillon family.