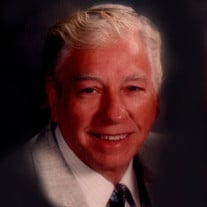 Paul Herbert Smith, age 92, of Zanesville, died 12:24 PM, Thursday, April 29, 2021, at his home. He was born Thursday, January 10, 1929, in Zanesville, the son of Willis Albert Smith and Margaret (Hartman) Minnie. He was married to Lora (Ditter) Smith who survives. Paul was a member of the Norval Park Church of Christ, where he enjoyed helping any way he could on any day of the week. He was a lifetime member of more than 50 years and twice Past President of the Fraternal Order of Police Association in Zanesville, a lifetime member and past Trustee of the Fraternal Order of Eagles Arie #302 in Zanesville. He was a talented man with many skills, who never met a stranger and was willing to help anyone who needed it. Paul Began working at Brockway Glass in 1952 and remained working there for 33 years, retiring in 1985. Paul is survived by his wife Lora Smith; his son Mark Smith of Zanesville; sisters: Cindy Wyle of TX, and Evelyn Haynes of LA; one brother, Glenn Smith of Newport News, VA; seven grandchildren: Jenna Smith, Michael Smith, Tony Smith, Loralie Smith, Nikki Sorgi, Mandi Saunders, and Mariah Smith; and several great grandchildren, along with many nieces and nephews. In addition to his parents, Paul was preceded in death by one son, Paul R. Smith; two sisters: Bertie Marple, and Dolly Englehart; four brothers: Raymond and Bill Smith, Harry Englehart and Harold Smith. Donations may be made in Paul’s honor to the Norval Park Church of Christ: 845 Arch Street, Zanesville, OH 43701 or to Christ Table: 28 North 6th Street, Zanesville, OH 43701. Friends may call from 11:00 AM to 1:00 PM on Saturday, May 8, 2021 at the Hillis, Combs & Nestor Funeral Home, 935 Forest Avenue, Zanesville, OH, where a funeral service will be held at 1:00 PM with Pastor Steve Smith officiating. Burial will conclude in the Rose Hill Cemetery, Roseville. To sign the online register book or to send a personal condolence note please visit www.hilliscombsnestor.com.

The family of Paul H. Smith created this Life Tributes page to make it easy to share your memories.

Send flowers to the Smith family.