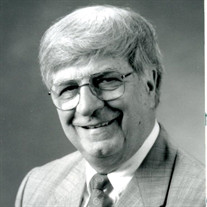 Paul F. Shannon passed away on Friday, March 30, 2018, at Riverside Methodist Hospital in Columbus. He was born May 22, 1931, in Newark, the son of Andrew & Marguerite (Mueller) Shannon. Shannon served his country as a commissioned officer in the Infantry of the United States Army during the Korean Conflict and spent most of his working career in banking in Newark, Columbus, and Zanesville, retiring in 1998, as vice president of the former First National Bank of Zanesville. He graduated from Newark’s St. Francis de Sales High School in 1949, and received additional education from the School of Marketing at Northwestern University, the American Institute of Banking and the Graduate School of Marketing at Northwestern University. Paul is likely best remembered for his love of singing. A Catholic by faith, he directed the Newark St. Francis Men’s Choir and St. Gregory Men’s Choir for over 35 years. He also spent 68 years as a volunteer and member of the Barbershop Harmony Society. He is past director of Newark’s Land of Legend Barbershop Chorus and Zanesville’s Y-City Barbershop Chorus and served for several years in Columbus, as an assistant director of the Singing Buckeyes. He also sang in many barbershop quartets including the 1964 District Champion Wayfarers and most recently the Kids at Heart who made numerous presentations regarding the Buckeye Harmony Camp to high school music students in and around Zanesville and Newark, plus singing for numerous affairs in those communities. Since he started singing barbershop at an early age himself, he enjoyed attracting young singers into his chapter. During his tenure as its chorus director, the Zanesville Barbershop Chapter was among the leaders in the nation in its number of youth members, having had 17 “student members” in the early 2000’s. Also involved in many other community activities, Shannon was past treasurer of the City of Newark, president of the Zanesville Concert Association, charter secretary-treasurer of the Zanesville Daybreak Rotary Club, treasurer of the Newark Jaycees, and a member and/or officer of many other organizations. He received the Community Service Award from the Newark Jaycees, the Bob & Delores Hope Good Samaritan Award in Zanesville, was named to the Hall of Fame of the Barbershoppers’ Johnny Appleseed District, and many other recognitions over the years. Preceding him in death were his parents, Andrew & Marguerite Shannon, and one brother, Robert Shannon. Paul is survived by his loving wife, Susan “Susie” Shannon; three daughters, Karen (Jim) Dellner, Christine (C.R.) Litts and Kathy (Roger) McClain; grandchildren, Shannon (Matt) Caudill, Greg Dellner, Meghan (Tom) Fairall, Drew (Kelsey) McClain, Gretchen (Bart) Sides, Abby Litts and Matt McClain; great grandchildren, Emma & Leah Caudill, Parker, Paxton & Shepherd Fairall and Cohen & Tucker McClain; one brother, Tom (Pat) Shannon; sister-in-law, Judy Rada; plus many nieces, nephews, great nieces, great nephews, close friends including, Charlie & Marcy White and so many others, too numerous to list. Per Paul’s request, there will be no calling hours. A celebration of his life will be held 2:00 PM, Saturday, April 7, 2018, at Trinity Evangelical Lutheran Church, 128 South Seventh Street, Zanesville, with Pastor Andrew Wilson officiating. Memorial contributions may be made in Paul’s memory to a charity of one’s choice or the Y-City Barbershop Chorus, PO Box 8075, Zanesville, Ohio 43702-8075, for the Youth in Harmony Project, a project that was near and dear to Paul’s heart. To sign the online guestbook or leave a personal note of condolence please visit www.hilliscombsnestor.com

Paul F. Shannon passed away on Friday, March 30, 2018, at Riverside Methodist Hospital in Columbus. He was born May 22, 1931, in Newark, the son of Andrew & Marguerite (Mueller) Shannon. Shannon served his country as a commissioned officer... View Obituary & Service Information

The family of Paul F. Shannon created this Life Tributes page to make it easy to share your memories.

Send flowers to the Shannon family.