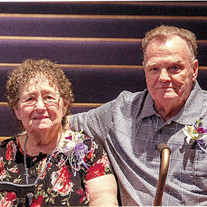 Paul D. Brown & Janet A. Brown, both 82, of Zanesville, died Tuesday, December 25, 2018, while residents at the Oaks at Bethesda following lengthy illnesses. Paul was born Tuesday, September 29, 1936, in Ashland, KY, the son of Roby Brown and Exer (Clay) Brown. Janet was born Tuesday, October 22, 1936, in Madison County the daughter of Roger Warfel and Loa (Grewell) Warfel. Paul & Janet were married on Thursday, March 10, 1955, in Janet’s Family Home in Plumwood, Ohio. Paul retired as a Meat Merchandiser and Manager for Fleming Foods, where he assisted local grocers throughout the area. Janet retired as a School Bus Driver for East Muskingum School District. They enjoyed camping and following retirement traveled extensively throughout the United States sightseeing in their 5th wheel travel trailer. Janet enjoyed ceramics and crafts while Paul was at his happiest working around the house, always helping others and keeping busy. They were loving spouses, parents and grandparents who enjoyed the time they spent with each other and their family. Paul & Janet are survived by four children: Deborah Wolfinger of Zanesville, Denise (Jim) Foster of Zanesville, Paul (Kelly) Brown of Redford, MI, and Jeff (Paula) Brown of Marysville; several grandchildren and great grandchildren; one sister: Florence (Bob) Persinger of Mechanicsburg; and numerous nieces and nieces. In addition to their parents, Paul & Janet were preceded in death by brothers and sisters. Friends may call from 4:00 to 7:00 PM, Friday, December 28, 2018, at the Hillis, Combs & Nestor Funeral Home, 935 Forest Avenue, Zanesville, where combined Funeral Services for both Paul & Janet will be held at 11:00 AM Saturday, December 29, 2018, with Pastor Joseph DiVincenzo officiating. They will be laid to rest together in St. Paul’s Cemetery. Memorial Contributions may be made to Genesis Hospice & Palliative Care in Paul & Janet’s memory. To sign the online guestbook or leave a personal note of condolence please visit www.hilliscombsnestor.com

Paul D. Brown & Janet A. Brown, both 82, of Zanesville, died Tuesday, December 25, 2018, while residents at the Oaks at Bethesda following lengthy illnesses. Paul was born Tuesday, September 29, 1936, in Ashland, KY, the son of Roby Brown and... View Obituary & Service Information

The family of Paul & Janet Brown created this Life Tributes page to make it easy to share your memories.

Send flowers to the Brown family.