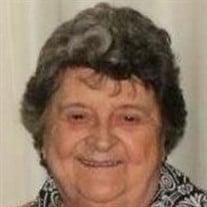 Patricia M. "Patty" Barrett, 83 of Zanesville, went home to be with the Lord at 3:13 AM, Thursday, October 13, 2016 while being cared for by Cedar Hill Care Center, following a lengthy illness. She was born Wednesday, August 16, 1933 in Zanesville, the daughter of William L. Jones and Ida A. (Stalter) Jones. She married Wayne A. Barrett on Saturday, May 16, 1953 and was a very active member of St. Thomas Aquinas Catholic Church. She served as a Eucharistic Minister, was a member of the Rosary Altar Society and was active with the Prayer Chain. Patty was a faithful Christian who loved the Lord and to do his work. She sold Avon Products and was employed at Brockway Glass for several years. Patty was a loving and caring wife, mother and grandmother. Family was everything to her and she was the perfect mother, her family affectionately called her the Peace Maker. Patty’s family would like to thank the caring staff of Cedar Hill Care Center for the loving attention and care give to their mother. Patty is survived by one son: John (Elaine Somma) Barrett of Land of Lakes, FL; one daughter: Patricia “Terrie” (Robert) Hartmeyer of Blacklick; seven grandchildren; nine great grandchildren; two brothers: William (Evelyn) Jones, Jr. of Akron and Michael G. ( Anita ) Jones of Newark; numerous nieces and nephews and a host of friends. Patty was preceded in death by her parents: her husband: Wayne two sons: Jeff Barrett and James Barrett; three daughters: Carol Anne Barrett, Cathy Jackson and Infant Georgia Lee. Friends may call from 3:00 to 7:00 PM, Monday, October 17, 2016 at the Hillis, Combs & Nestor Funeral Home, 935 Forest Avenue, Zanesville, where a Christian Vigil will be held at 7:45 PM. Mass of Christian Burial will be Celebrated 10:00 AM, Tuesday, October 18, 2016 at St. Thomas Aquinas Catholic Church, 144 North Fourth Street, Zanesville with a Dominican Father as celebrant. Burial will follow in Mt. Olive Cemetery, 10:00 AM, Wednesday, October 19, 2016. Memorial contributions may be made to a hospice charity of one’s choice, in Patty’s Memory. To sign the online register book or to send a personal condolence note please visit www.hilliscombsnestor.com

Patricia M. "Patty" Barrett, 83 of Zanesville, went home to be with the Lord at 3:13 AM, Thursday, October 13, 2016 while being cared for by Cedar Hill Care Center, following a lengthy illness. She was born Wednesday, August 16, 1933 in Zanesville,... View Obituary & Service Information

The family of Patricia "Patty" M. Barrett created this Life Tributes page to make it easy to share your memories.

Patricia M. &quot;Patty&quot; Barrett, 83 of Zanesville, went home to be...

Send flowers to the Barrett family.