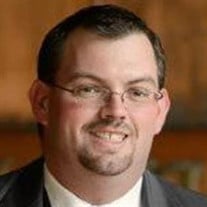 Nicholas A. "Nick" Tilton, 32 of Lewis Center, formerly of Zanesville died 9:05 AM, Tuesday, December 16, 2014 at The James Cancer Hospital at The Ohio State University Wexner Medical Center in Columbus following a courageous battle with cancer. He was born Wednesday, January 27, 1982 in Zanesville, the son of Jeff Tilton and Debbon (Schaum) Kappes. Nick was a 2000 graduate of West Muskingum High School where he was active in the choir and played baseball and football. He was an Eagle Scout, enjoyed singing in the Barbershop Quartet, playing golf and volleyball. He was a proud graduate of The Ohio State University and was a diehard Buckeye’s fan. Nick was employed with 5th Avenue Lumber in Columbus and loved music and spending time with friends at Jamboree In The Hills. Nick is survived by his mother & step-father: Debbon & Jim Kappes of Zanesville; his father & step-mother: Jeff & Becky Tilton of Zanesville; one brother: Dr. Shane & Brandy Tilton of Coshocton: his maternal grandmother: Shirley Schaum of Zanesville and several aunts and uncles. Friends may call from 2:00 to 4:00 & 6:00 to 8:00 PM, Friday, December 19, 2014 at The Hillis, Combs & Nestor Funeral Home, 935 Forest Avenue, Zanesville and one hour prior to funeral services from 11:00 AM till time of service at Trinity Evangelical Lutheran Church. Funeral Services will be held 12 Noon Saturday, December 20, 2014, at Trinity Evangelical Lutheran Church, 120 North 7th Street, Zanesville with Rev. Mark Matzke officiating. Burial will follow in Zanesville Memorial Park. Memorial contributions may be made to Light the Hill, a West Muskingum Stadium Renovation Project, c/o Muskingum County Community Foundation, 534 Putnam Avenue, Zanesville, OH 43701 in Nick’s memory. To sign the online register book or to send a personal condolence note please visit www.hilliscombsnestor.com

The family of Nicholas "Nick" A. Tilton created this Life Tributes page to make it easy to share your memories.

Nicholas A. &quot;Nick&quot; Tilton, 32 of Lewis Center, formerly of Zanesville...

Send flowers to the Tilton family.