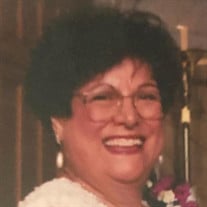 Najla Joseph, age 85, passed away peacefully on Monday, March 16, 2020, around 4:30 AM following a prolonged illness. She was four days shy of her 86th birthday. Born on March 20, 1934, to parents Nazha and Tanous El’Murr in the village of Ka el Rim, Lebanon, Najla immigrated to the United States as the new bride of the late William “Bill” Joseph in the summer of 1963. Najla was preceded in death by her adoring husband Bill and siblings Kabalan, Hanna, Najib, Faridi, and Aida. She is survived by her three daughters Lisa (John) Farah, Rhonda (Ronald) Frissora, and Samia (Emil) Fankhauser, grandchildren Christian, Nicole, Sophie, Maria, Vincenzo, Emily, and William, brother Elias, and best friend Angel (Raymond) Mansor. She was very proud of her grandchildren as evidenced by the placard on her speedy white Mazda, “TATA X7,” a.k.a “grandma” (in Arabic) x 7. A devout Christian, Najla was an active member of Zanesville's former Holy Trinity Melkite Catholic Church as well as the local Lebanese/Syrian women’s charity group, the El Binette Club. She was known for her culinary skills and cooked some of the best Lebanese food in town. She was a skilled seamstress, had a green thumb in the garden, and she could drive a golf ball at Fullers Fairways even farther than her husband Bill could. She loved to chant acapella during the Melkite divine liturgy and also enjoyed playing cards with her many friends. Given current public health concerns, private viewing for immediate family only will be held at the Hillis Combs & Nestor Funeral Home with private family services in the traditional Melkite Catholic Funeral Rite, which is religion that Najla practiced her whole life, will be held. The family will schedule another memorial for their beloved Najla to celebrate her life later this summer. As she would have wanted, it will be enriched by our Lebanese hospitality, and all of the traditional foods that Najla so dearly loved to cook will be served. May her memory be eternal. To sign the online guestbook or leave a personal note of condolence please visit www.hilliscombsnestor.com.

The family of Najla Joseph created this Life Tributes page to make it easy to share your memories.

Send flowers to the Joseph family.