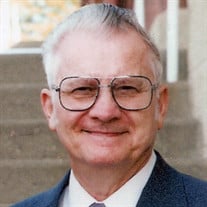 Myrl F. Untied, Jr. 92 of Zanesville, died 4:20 PM, Thursday, January 12, 2017 at Genesis Morrison House Hospice. He was born Wednesday, July 2, 1924 in Dresden, OH the son of Myrl Untied, Sr. and Isabelle (Wagner) Untied. He was married on Saturday, September 29, 1945 to Charlotte (Schmeltzer) Untied who survives. He was a member of St. Nicholas Catholic Church. Myrl served in the United States Army during WWII. He retired from the US Postal Service following 27 years of service. He was a life member of the DAV and VFW and a 3rd degree member of the Knights of Columbus. He also was an altar server and a Eucharistic Minister at St. Nicholas Catholic Church. In addition to his wife, Charlotte, he is survived by six children: Michael (Vicki) J. Untied of Zanesville, Patrick M. Untied, Bonnie A. Dooley, Mary Jo Untied all of Zanesville, Thomas (Kara) A. Untied of FL and Linda (Joseph Orourke) of Zanesville; eight grandchildren, numerous great- grandchildren and great- great grandchildren; three brothers, Rolland Untied of Marion, Bill Untied and Don Untied of OH, and several nieces and nephews. He was preceded in death by his parents; Myrl Untied, Sr. and Isabelle Untied; four brothers, Everett, Wayne, Richard and Charles Untied and two sisters, Mary Thunderburgh and Margaret Smythe. Friends may call from 4:00 PM to 8:00 PM on Sunday, January 22, 2017 at the Hillis, Combs & Nestor Funeral Home, 935 Forest Avenue, Zanesville, OH, where a Christian Prayer Vigil will take place at 7:45 PM. A Mass of Christian Burial will be celebrated 10:30 AM on Monday, January 23, 2017 at St. Nicholas Catholic Church with Father Martin Ralko as celebrant. Burial will conclude in the Mount Olive Cemetery, Zanesville where the VFW, American Legion along with the US Army will conduct full military honors. To sign the online register book or to send a personal condolence note please visit www.hilliscombsnestor.com.

The family of Myrl F. Untied Jr. created this Life Tributes page to make it easy to share your memories.

Send flowers to the Untied family.