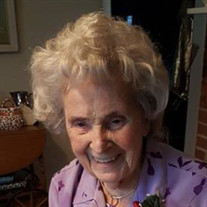 Mildred “Millie” Fisher Combs, 95, of Zanesville, has gone home to her Heavenly Father on Sunday, November 25, 2018. She was born December 31, 1922, along with her twin sister Marjory to Michael & Myrtle Fisher. Millie was a 1940 graduate of Lash High School and a lifetime member of Immanuel United Church of Christ. Millie’s first employment was as a kindergarten assistant at Westview School, where she also did some office work. She next worked in the office at Line Material Company. In 1941, she married Gerald F. Combs and for the next four years moved around the country with Gerald who was in the U.S. Army. She worked in the offices where Gerald was stationed (Camp Grant, Rockford, IL & Fort Lewis, Tacoma, WA.) Millie & Gerald returned to Zanesville after Gerald was discharged. Millie worked at Detroit Harvester as well as General Electric and Shawnee Pottery. She worked several years for Good Samaritan Hospital in charge of the building program for the first addition to the hospital, and performed personnel and payroll duties for Memorial Park. She completed her career as a computer programmer for National Cash Register Company. Following her retirement she also worked part time as a Wal-Mart Greeter. She and Gerald spent many of their retirement years as snow birds in the Rio Grande Valley area of Texas. Following Gerald’s death Millie married her second husband, Dennis “Kent” Elkins. She and Kent volunteered at Christ’s Table for many years where she prided herself in making people smile. They also spent their winters in Texas where they helped to start Christmas for the underprivileged in Mexico. Gerald & Millie are survived by two sons, Gerald M. “Jerry” (Sandy) Combs and Dennis S. (Carla) Combs; five grandchildren, David Combs, Chris Combs, Heather Harris, Tina Denny & Carole Gecowets; 16 great grandchildren; 2 great-great grandchildren; one sister, Cledia Lou Archer and many nieces and nephews. In addition to her parents, Millie was preceded by her first husband of over 60 years, Gerald Combs, her second husband, Kent Elkins, 4 sisters, Betty Bartelme, Patty Weir, Joy Potts and her twin sister, Marjory Foster, a grandson, Dennis M. Combs, one great-great grandson, Travis, and many nieces, nephews and brothers-in-law. The family would like to thank the staff of Brookdale and Hospice of Central Ohio for the care and love they provided to Millie during her illness. Friends may call Wednesday, November 28, 2018, from 10:00 AM till 11:00 AM at Coburn United Methodist Church, 3618 Maple Avenue, Zanesville, where funeral services will follow at 11:00 AM with Rev. Justin Williams officiating. Millie will be laid to rest in Zanesville Memorial Park. In lieu of flowers memorial contributions may be made to Christ Table, 28 South Sixth Street, Zanesville, Ohio 43701 or a charity of one’s choice in Millie’s memory. To sign the online guestbook or leave a personal note of condolence please visit www.hilliscombsnestor.com

The family of Mildred "Millie" Combs created this Life Tributes page to make it easy to share your memories.

Send flowers to the Combs family.