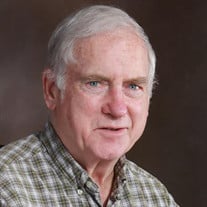 Michael Francis Lynch, 81, passed away peacefully April 9th, 2021 at his Nashport, Ohio home, with his wife by his side. He was born on October 27, 1939 in Youngstown, Ohio, to Thomas and Rita (Null) Lynch. His siblings include Tim (Karen) Lynch, Kathy (Mike) Cooper, John (Marlene) Lynch, Debbie (Bob) Moorehead, Pat (Donna) Lynch. He married Penny (Ball) Lynch December 12, 1987. He lived in Washington, DC, as an infant, and moved to Youngstown shortly after. His family moved to Zanesville when he was a child and they remained long term residents. Mike graduated from Rosecrans High School, and Ohio University with a degree in Accounting. He was a Certified Public Account since 1961, and was part of the longest family-owned accounting business in Zanesville. He retired from Lynch & Lynch CPAs in 2019. He served in the US Army Reserves from 1961-1967. Mike loved to run, enjoyed scuba diving, had a personal pilot’s license, and you could always find him happily mowing the lawn. He was active in Zanesville politics in his younger years. He served on the Board of Health for close to 20 years. He was a member of the Rotary Club for most of his accounting years. He served on the Dillon Area Advisory Council. He was a member of The Church of Jesus Christ of Latter-day Saints, joining in 1982. He was a Temple worker for many years and served the church in many capacities for 40 years. Mike is survived by his wife, Penny (Ball) Lynch, of Nashport, OH, and his children, Michael (Shelly) Lynch, of Zanesville, Brad (Shelley) Lynch, of Zanesville, Greg (Allison) Lynch of California, Wesley (Arielle) Lynch of Nashport, Casey (Kim) Lynch of Duncan Falls, Adam (Tiffany) Lynch of Zanesville, and Peter Lynch (Markie Blyss) of Nashport. He is also survived by 23 grandchildren, and his siblings John Lynch, Kathy (Mike) Cooper, Debbie (Bob) Moorehead, and Pat (Donna) Lynch. Mike was preceded in death by his parents, Thomas and Rita Lynch and brother, Tim Lynch. Calling hours will be held on Wednesday, April 14th, 2021, from 2:00-4:00pm & 6:00-8:00pm, at the Hillis, Combs & Nestor Funeral Home, 935 Forest Avenue, Zanesville. Funeral service will be held on Thursday, April 15th, 2021 at 1:00pm at the funeral Home. It is most fitting that a dedicated CPA be buried on Tax Day. Burial will follow at Irville Cemetery. Bishop Mark Pumphrey will be officiating. His seven sons will serve as pallbearers. In lieu of flowers, donations can be made in honor of Mike to Genesis Hospice of Zanesville. To sign the online register book or to send a personal condolence note please visit www.hilliscombsnestor.com

Michael Francis Lynch, 81, passed away peacefully April 9th, 2021 at his Nashport, Ohio home, with his wife by his side. He was born on October 27, 1939 in Youngstown, Ohio, to Thomas and Rita (Null) Lynch. His siblings include Tim (Karen) Lynch,... View Obituary & Service Information

The family of Michael Francis Lynch created this Life Tributes page to make it easy to share your memories.

Send flowers to the Lynch family.