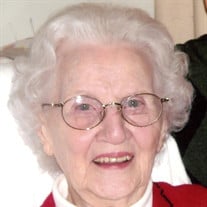 Mary H. Imlay, 95 of Zanesville died, Thursday, April 07, 2016 at the Kensington Nursing Home in Aurora. She was born Wednesday, September 8, 1920 in Zanesville, the daughter of Frank Armbruster and Mable (Adams) Armbruster. She married George C. Imlay on Monday, November 1, 1943 and was a member of St. Thomas Aquinas Catholic Church. Mary worked alongside her husband George with the Imlay Company for many years as bookkeeper. She was a member of Zanesville Women’s Club and an avid bridge player. Mary was a loving and caring wife, mother and grandmother who enjoyed spending time with her family. Mary is survived by her daughter: Pat (Dave) Schwerzler of Chagrin Falls; one granddaughter: Gretchen (Tom) Whitcomb of Tolland, CT; one great grandson: Jefferson Whitcomb; one sister: Leona Carlson of Getzville, NY and many nieces, nephews and cousins. In addition to her parents, Mary was preceded in death by her husband: George Imlay; two daughters: Diane Imlay and Kathleen Imlay; two brothers and four sisters. Friends may call 3:00 to 6:00 PM, Tuesday, April 12, 2016 at the Hillis, Combs & Nestor Funeral Home, 935 Forest Avenue, Zanesville where a Christian Vigil will be held at 5:45 PM. Mass of Christian Burial will be celebrated 10:00 AM, Wednesday, April 13, 2016 at Saint Thomas Aquinas Catholic Church, 144 North Fifth Street, Zanesville, with a Dominican Father as celebrant. Mary will be laid to rest next to her beloved husband in Mt. Calvary Cemetery. To sign the online register book or to send a personal condolence note please visit www.hilliscombsnestor.com

The family of Mary H. Imlay created this Life Tributes page to make it easy to share your memories.

Send flowers to the Imlay family.