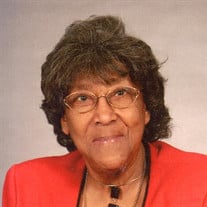 On June 14, 2015 at 10:30 AM, Mary Elizabeth Ford of Zanesville, passed away following complications of a stroke at Genesis Morrison House Hospice. Mary was born December 16, 1929, in Steubenville, the daughter of Della Mae Harding and Joseph Terry. She came from a family with seven siblings: Dorothy, Melva, Kim, Howard, Joe, Adrian and Von. Mary was a faithful and joyous woman of God and was a member of Greater Apostolic Church. She was known as the “mother of the church” or “Sister Ford.” Word around the church was that Sister Ford had one of the most beautiful voices and could be heard above all. When she was called upon to pass her blessings and prayers to others, it felt like she had the gift of God’s hands himself. Sister Ford was a very poplar and well liked lady around town; everyone knew the big white house on Luck Avenue belonged to her. Her favorite pass time was to sit on her porch and do word searches, talk on the phone or visit with anyone who stopped by. Sister Ford liked for everyone to call her “grandma”. She would just say “honey, call me grandma” and she meant it. Sister Ford was a loving and gentle soul and her memory will live on with all those she has touched. She blessed this earth with her presence for over 85 years. Sister Ford is survived by her 11 children: Willie, Jr., Stephen, Belita, Tanara, Ian, Francheska, Vashti, Quintenious, Levin, Ozend and Ritheen. Sister Ford’s legacy is continued with her grandchildren and great grandchildren totaling 190 and a host of nieces and nephews. In addition to her parents, Sister Ford was preceded in by her husband of 35 years: Willie Ford, Sr. two sons: infant Flavius Ford and Darius Markum “D.M” Ford In accordance with Sister Ford’s wishes no services will be held and a caring cremation will follow. To sign the online guestbook or leave a personal note of condolence please visit www.hilliscombsnestor.com

On June 14, 2015 at 10:30 AM, Mary Elizabeth Ford of Zanesville, passed away following complications of a stroke at Genesis Morrison House Hospice. Mary was born December 16, 1929, in Steubenville, the daughter of Della Mae Harding and Joseph... View Obituary & Service Information

The family of Mary Elizabeth Ford created this Life Tributes page to make it easy to share your memories.

Send flowers to the Ford family.