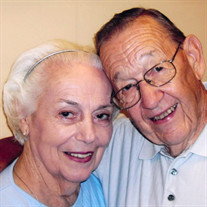 On September 22, 2020 Mary Ann Miller, 88, of Zanesville, peacefully passed away having lived a long, full and love-filled life. She passed on to be reunited with her loving husband of 40 years, Jim, who died on Thanksgiving Day in 2019. She has looked forward for some time to reuniting with her eldest son Patrick, who died earlier in 2019. Mary Ann’s life was reflective of the history of Zanesville. She was born on August 15, 1932 at Good Samaritan Hospital, the daughter of Evelyne and William H. Adams, Jr. During her early years she grew up in a number of now historic homes in Zanesville, including the Dr. Increase Mathews house. In recollections she told her children, she recalled spending time with her father, Bill, who managed Adams Brothers Inc. as it completed cement contracting projects including work on Zanesville’s famed Y-bridge, Interstate 70, Good Samaritan and Bethesda hospitals and Dillon Lake Dam. She recalled visiting at her father’s office, which now houses the Muddy Misers restaurant. Mary Ann graduated from St. Nicholas schools in Zanesville, and then the College of St. Mary of the Springs. She went on from there to work in a wide range of careers as a Public Relations Home Economist with the Columbus and Southern Ohio Electric Company, the Dairy Institute of the Erie (PA) Area, and McDonald’s franchises in the Zanesville area. In the course of work she had a local TV cooking show in Erie and hosted numerous children’s birthday parties for McDonalds around Zanesville. After college, Mary Ann married John O’Leary, a former Zanesville resident and graduate of the US Naval Academy. Upon graduation, John took a commission in the Air Force, which resulted in the couple moving to Cheyenne, Wyoming and Anchorage, Alaska. In Alaska they learned to endure the harsh winters and life on the front line of the Cold War. They had the opportunity to enjoy not only the beauty and grandeur that is Alaska, but also to be there to celebrate its entry into statehood. With John, Mary Ann welcomed into the world three sons: Pat (Mary Kay) now deceased of Sunrise, FL; Mike (Jean) of Atlanta, GA; and Tim (Beth) of Cincinnati. With John’s work, the family lived in numerous locations, including Columbus; Erie, PA; Galva, IL; and Springfield, MO. Mary Ann returned to Zanesville and met the love of her life, Jim Miller. Mary Ann had casually known Jim, who had been her brother’s childhood friend. Jim, who managed the Miller Oil Company, was a widower. In marrying Jim in 1980, Mary Ann gained four additional children, Chuck of Manassas, VA, Melissa (Ed) Canter of Pickerington, Vince (Valerie) of Zanesville, and Vicki Miller Reed of Zanesville. Mary Ann and Jim’s life together spanned 40 years of peace and joy spending time with family and friends. Mary Ann will be so missed by seven children, 14 grandchildren and 6 great grandchildren. She and Jim thoroughly enjoyed their parish family at St. Mary’s Mattingly Settlement. Mary Ann’s passion for art enriched her life. Her love of sewing led her to a joint adventure with her sister, Melanie. They called themselves “Friends and Sisters Too.” Together they designed and sold their quilted jackets which were converted into a pattern featured in McCall’s magazine and sold throughout fabric stores nationwide. Mary Ann crafted several quilts which sold at auctions to raise money for local charities. She was also among the featured artists painting large vases displayed throughout Zanesville to recognize the city’s emergence as an artist colony. The family would like to express their appreciation to Sarah Vincenzo and her staff at Brookdale Senior Living, as with their continued kindness and loving care they created a final home for Mary Ann and Jim. Mary Ann’s life will be celebrated at a funeral service to be held at St. Mary’s Catholic Church in Mattingly Settlement on Saturday, September 26, 2020 at 10:00 a.m. The family wishes that more people who would like to attend could do so but recognizes that in today’s environment large gatherings should be avoided. Hence the church has graciously enabled the service to be viewed via live internet stream at www.youtube.com/stmarysmattinglysettlement. The family encourages attendance via the web-based streaming program, however those who do attend the service are asked to ensure social distancing and to consider wearing a mask. Mary Ann will be laid to rest next to Jim in Mt. Olive Cemetery. To sign the online guestbook or leave a personal note of condolence please visit www.hilliscombsnestor.com

On September 22, 2020 Mary Ann Miller, 88, of Zanesville, peacefully passed away having lived a long, full and love-filled life. She passed on to be reunited with her loving husband of 40 years, Jim, who died on Thanksgiving Day in 2019. She... View Obituary & Service Information

The family of Mary Ann Miller created this Life Tributes page to make it easy to share your memories.

Send flowers to the Miller family.