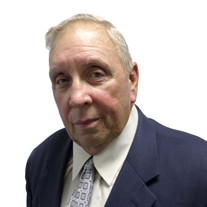 Marvin Lee Eppley, age 78, of Blacklick, OH, died 1:10 PM, Thursday, September 14, 2017 under the care of Hospice of Central Ohio at Licking Memorial Hospital in Newark following a lengthy illness. He was born Wednesday, June 21, 1939, in Zanesville, the son of Delmar Eppley and Letha (Rowland) Eppley. He was married on Saturday, August 15, 1964, to Ann (Ross) Eppley who survives. Lee served in the United States Navy and was active in the community by serving on the Y-City Baseball Board and was Commissioner for over 40 years. He was also the Zanesville High School Athletic Boosters, and the Devilette Boosters where he was President for 2 Years. Lee also coached for South Rebels Football for over 20 years. He served on the Zanesville City School Board for 12 years and was a member of the Hall of Fame Committee . He also enjoyed his involvement with the Old-Timers Association where he was inducted into the Old-Timers Hall of Fame. In addition to his wife he is survived by one son, Marvin Lee Eppley, II of Blacklick, one daughter, Michonne Lynnette Eppley, of Blacklick; one sister, Faye Arnold, of Old Bridge, N.J.; Brother-in-law, Robert Fleming of Stow; several loving nieces and nephews and other relatives; special friends, Don and Karen Green (Traveling Buddies), Tedd Murphy, L.T. Kerns, and Mike Whiteman; his loving feline friends, Riley, Rowdy, Colby and Copper; and grand kitties, Rascal and Brutus. He was preceded in death by his parents; two brothers, Dale Eppley and Kenny Eppley and one sister, Patricia Flemming. Friends may call from 3:00 PM to 7:00 PM on Monday, September 18, 2017 at the Hillis, Combs & Nestor Funeral Home, 935 Forest Avenue, Zanesville. A funeral service will be held 11:00 AM Tuesday, September 19, 2017, at the funeral home with Pastor Keith Taylor officiating. Burial will conclude in the Zanesville Memorial Park, where the US Navy, VFW Post #1058 and American Legion Post #29 will conduct full military honors. To sign the online register book or to send a personal condolence note please visit www.hilliscombsnestor.com.

The family of Marvin Lee Eppley created this Life Tributes page to make it easy to share your memories.

Send flowers to the Eppley family.