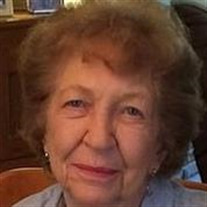 Martha Janet Hepler, 85, formally of Zanesville passed away March 7, 2016 at Morrison House. She was born June 21, 1930 in Zanesville, the daughter of the late Hartson and Dorothy Harber Gaffney. She graduated from Lash High School in 1949. She married Russell Hepler, June 24, 1951, who preceded her in death October 18, 1985. She was Lutheran by faith. Martha was a beloved mother, sister, grandmother and aunt. She is retired from Cigna Insurance, where she worked many years as a Customer Service Representative. Martha is survived by her brother, Donald Gaffney, children David (Rita) Hepler of Columbus and Susan Dunlap of Zanesville, grandchildren Andrew (Heather) Dunlap of Zanesville, Amanda (partner Josh Olson) Dunlap of Athens, Megan (partner Tyler Turner) of Florida, Shanna (Scott) Bruce of Texas, Shad McGarvey of Columbus, and Thomas Patrick Hepler of N. Carolina, daughter in law Debra Hepler and special friend and sister in law Mary Hepler, as well as nieces and nephews. In addition to her parents and husband she was preceded in death by her son Charles Patrick Hepler, son in law Ray Dunlap, and grandson Seth McGarvey. In lieu of flowers of donations can made to The Zanesville Salvation Army. Her daughter would like to thank the staff of Genesis Hospital and Morrison House for all of their help and caring support. Friends may call at the Hillis, Combs and Nestor Funeral Home Friday March 11, 2016 from 9:30 to 11:00. A caring funeral service will take place at 11:00 at the funeral home with Rev. Joy French officiating. Burial with follow at Memorial Park. To sign the online guestbook or leave a personal note of condolence please visit www.hilliscombsnestor.com

Martha Janet Hepler, 85, formally of Zanesville passed away March 7, 2016 at Morrison House. She was born June 21, 1930 in Zanesville, the daughter of the late Hartson and Dorothy Harber Gaffney. She graduated from Lash High School in 1949.... View Obituary & Service Information

The family of Martha J. Hepler created this Life Tributes page to make it easy to share your memories.

Send flowers to the Hepler family.