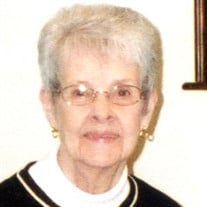 Marjorie Haefner, 97, of Zanesville, died 12:12 AM, Thursday, February 15, 2018, at The Oaks at Bethesda. She was born Tuesday, February 8, 1921, in Zanesville, the daughter of Jefferson C. Reeder and Mable (Passwaters) Reeder. She married John F. Haefner on Saturday, March 12, 1949, and was a member of St. Nicholas Catholic Church. Marge retired following over25 years of service as bookkeeper with Henneberg's Furniture. She was a volunteer for Good Samaritan Hospital, and along with her husband, were former members of the Zanes & Janes Square Dance Club. Marge was an avid bowler, golfer, and was a loving and caring wife, mother, grandmother and great grandmother who will be dearly missed by her family. Marge is survived by two daughters: Judith (George) Black of Zanesville, and Sandra Campbell of Groveport; seven grandchildren: Gale Thompson of Florida, Gaye Salazar of Michigan, Tina (James) Barnett of Nashville, TN, Stacia (Bradley) Davino of Heath, Eric (Jeanette) Murvine of Florida, Scott Young of Millersport, and Mark (Claudia) McMillan of Columbus; several great and great-great grandchildren and special friends: Colleen Skinner, Donnie Brown and Linda Sowers all of Zanesville. In addition to her parents, Marge was preceded in death by her husband: John Haefner, who died November 24, 1998; one grandson: Nicholas Salazar and one brother: Edward Reeder. Visitation will be held 11:00 AM to 12:30 PM, Tuesday, February, 20th, 2018, at The Hillis, Combs & Nestor Funeral Home, 935 Forest Avenue, Zanesville. Mass of Christian Burial will be celebrated immediately following at 1:00 PM, at St. Nicholas Catholic Church, 925 East Main Street, Zanesville with Fr. Martin J. Ralko as Celebrant. Marge will be laid to rest next to her beloved husband, John, in Zanesville Memorial Park.

Marjorie Haefner, 97, of Zanesville, died 12:12 AM, Thursday, February 15, 2018, at The Oaks at Bethesda. She was born Tuesday, February 8, 1921, in Zanesville, the daughter of Jefferson C. Reeder and Mable (Passwaters) Reeder. She married John... View Obituary & Service Information

The family of Marjorie Haefner created this Life Tributes page to make it easy to share your memories.

Send flowers to the Haefner family.