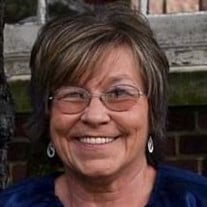 Marcella "Marcy" M. Sowers, 67 of Zanesville, died 7:34 AM, Wednesday, February 13, 2019, at Genesis Morrison House Hospice following a brief illness. She was born Sunday, December 30, 1951, in Zanesville, the daughter of John G. Dudas and Lillian "Bill" I. (Smith) Dudas. She married David L. Sowers on Friday, April 16, 1982, and was a member of St. Nicholas Catholic Church. Marcy was a loving wife, mother and grandmother. She was devoted to her family and cared for her parents, children, husband and extended family. She always put everyone first, before herself. Marcy was employed with her father in the insurance industry and was a homemaker. She was an avid bowler, winning the Peterson Tournament in Chicago. She loved the Buckeyes, sewing, NASCAR, knitting and watching her grandchildren. Marcy is survived by her husband: David Sowers; two children: Ryan (Caitlyn) Sowers & Megan (Justin) Dosch; five grandchildren: Avery & Gavin Sowers and Lillian, Sophie & Colton Dosch; two sisters: Rebecca (Joe) Haley of California, & Mary (Michael) Cain of Tennessee; one brother: Peter Dudas of Zanesville, and several nieces and nephews. In addition to her parents, Marcy was preceded in death by her son: Corey A. Sowers who died August 31, 1982. Friends may call from 2:00 to 4:00 & 6:00 to 8:00 PM, Sunday, February 17, 2019, at the Hillis, Combs & Nestor Funeral Home, 935 Forest Avenue, Zanesville, where a Christian Vigil will be held at 7:45 PM. Mass of Christian Burial will be celebrated 10:30 AM, Monday, February 18, at St. Nicholas Catholic Church, 955 East Main Street, Zanesville, with Fr. Martin J. Ralko as celebrant. Marcy will be laid to rest in St. Paul’s Cemetery. Memorial contributions may be made to Genesis Hospice & Palliative Care, 713 Forest Avenue, Zanesville, in Marcy’s memory. To sign the online register book or to send a personal condolence note please visit www.hilliscombsnestor.com

The family of Marcella "Marcy" M. Sowers created this Life Tributes page to make it easy to share your memories.

Send flowers to the Sowers family.