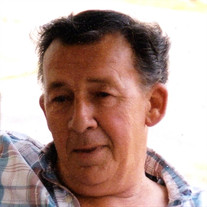 Lyle R. “Huck” Evans, age 75 of Zanesville, died 12:46 AM, Friday, April 8, 2016 at Willow Haven Care Center in Zanesville. He was born Thursday, December 12, 1940 in Licking County, the son of Edgar Evans and Amy (Staggers) Evans. He was married on Thursday, July 6, 1978 to Julia A. (Kennedy) Evans who preceded him in death on Wednesday, February 18, 2015. He was a Christin by faith. Mr. Evans was employed in the oil business in Newark, worked in the Maintenance Department for The Muskingum County Courthouse and Economy Linen as a janitor. He was an avid Cleveland Browns Fan. He is survived by one son: Brett Evans, one daughter Heidi (John) Dereck of Columbus; four step daughters: Cheryl (Don) Ullom of Dresden, Carol (Jeff) Knowlden of Orient, Paula (Kenny) Guss of Zanesville and Stacy (Tim) Barnett of Zanesville; 15 grandchildren including a special granddaughter: Virginia Mayle of the home; 29 great grandchildren; three great great grandchildren: two sisters Nancy Mathis of Newark and Grace Cooperrider of Newark, one brother: Edgar Evans, Jr of New Carlisle and several nieces and nephews In addition to his wife and parents he is preceded in death by three brothers, Ronald, Myron and Philip Evans and one sister Lucile Evans. Friends may call from 2:00 PM to 4:00 PM & 6:00 PM to 8:00 PM on Monday, April 11, 2016 at the Hillis, Combs & Nestor Funeral Home, 935 Forest Avenue, Zanesville, OH. A funeral service will be held 11:00 AM on Tuesday, April 12, 2016 at the funeral home with Terry D. Newman officiating. Burial will conclude in the Hanover Cemetery Hanover. To sign the online register book or to send a personal condolence note please visit www.hilliscombsnestor.com.

The family of Lyle R. "Huck" Evans created this Life Tributes page to make it easy to share your memories.

Send flowers to the Evans family.