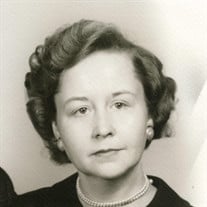 Loretta E. Paynter, 89 of Zanesville, died 3:40 PM, Thursday, February 11, 2016 at the Oaks at Bethesda. Loretta was born April 24, 1926 in Louisville, to Estella (Wahl) and Nicholas Schumacher. She grew up on the family farm along with 4 brothers and one sister where hard work and long hours were the norm. She attended Louisville High School. She arrived in Newark, in 1951 carrying her worldly possessions in a cardboard suit box. She found a job with J C Penny Company. She enrolled and graduated from the Newark College of Commerce and then accepted a position with the Ohio State Grange Insurance Company. She married Charles Paynter in 1958 and terminated her position with Grange Insurance after her first child was born. Charles was transferred to Zanesville in 1964. By this time they had 3 small children. They had built a new house in Newark and lived in it two years before moving to Zanesville. In Zanesville she became a member of the Saint Thomas Catholic Church. She became interested in painting and taught tole painting for seven years in her home. She was a talented seamstress and made most of the family clothes as long as the kids were in school and did alterations for others. Her favorite hobby was making quilts. Along with her husband they designed and donated several hundred quilts to the sick, needy, burnouts, etc. Her motto-the giver gets more than the receiver. When asked, she never said “No” to any charity or benefit. Along with her parents she was preceded in death by two brothers-James and William. Surviving are her husband, 3 children; William Paynter of Zanesville, Nancy Paynter of California and Donna Zaworski of Columbus, 2 grandchildren; Megan and Zachary Zaworski of Columbus. Two brothers; Norbert and Kenneth Schumacher of Louisville, Ohio and one sister; Shirley Reichard of Dayton, Ohio. In Lieu of Flowers, please donate to your favorite charity. She always said “Don’t send me flowers when I die-just give me a smile and a kind word while I’m living. Friends may call from 6:00 PM to 8:00 PM Sunday, February 14, 2016 at the Hillis, Combs & Nestor Funeral Home, 935 Forest Avenue, Zanesville, where a Christian Vigil will be held at 7:45 PM. Mass of Christian Burial will be celebrated 10:30 AM Monday, February 15, 2016 at St. Thomas Aquinas Catholic Church 144 North Fifth Street, Zanesville, with Fr. Stephen Dominic Hayes as celebrant. Burial will conclude in the Mt. Olive Cemetery Zanesville. To sign the online register book or to send a personal condolence note please visit www.hilliscombsnestor.com.

Loretta E. Paynter, 89 of Zanesville, died 3:40 PM, Thursday, February 11, 2016 at the Oaks at Bethesda. Loretta was born April 24, 1926 in Louisville, to Estella (Wahl) and Nicholas Schumacher. She grew up on the family farm along with 4 brothers... View Obituary & Service Information

The family of Loretta E. Paynter created this Life Tributes page to make it easy to share your memories.

Send flowers to the Paynter family.