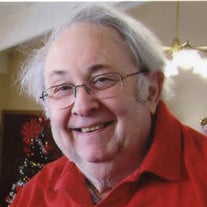 Kenneth E. "Ken" McPeck, 73 of Zanesville, died 10:45 AM, Sunday, January 1, 2017 at Willow Haven Care Center. He was born Thursday, January 21, 1943 in Zanesville, the son of Carl McPeck and Julia (Wagner) McPeck. He married Karen L. (Ross) McPeck on Sunday, September 17, 1967 and was a member of Coburn United Methodist Church. Ken served his country as a member of the United States Army Reserves. He was a sales representative with the Newark Advocate, the Times Recorder and Retired following many years of service with Heinrich Paper Company. To call Ken a “collector” is an understatement, he had a massive collection of magazines and records. In his collections were over 6000 singles and countless albums. He enjoyed his 1931 Ford Model A Street Rod and attending and managing car shows. He, along with his wife Karen, owned the Y-City Custom Car Association and Best Show Promotion running classic and street rod car shows. Ken was a loving and caring husband, father and grandfather who greatly enjoyed the time he spent with his family. Ken had an outgoing personality, a great sense of humor and never met a stranger. Ken is survived by his wife of over 49 years, Karen McPeck; two sons: Kyle McPeck and Kory (Kirsten) McPeck; four granddaughters: Mallory, Madison, Kiera & Lydia; a sister-in-law & brother-in-law: Gail (Bob) Hartman; special friends: Bill (Diane) Schindler, Greg Williamson, Joan Armbrust-Goldstein and Larry Skillman and many nieces, nephews and friends. The Mc Peck Family to would like to thank the caring staff of Willow Haven Care Center for the love and care given to Ken. Ken was preceded in death by his parents. Friends may call from 5:00 to 8:00 PM, Wednesday, January 4, 2017, at the Hillis, Combs & Nestor Funeral Home, 935 Forest Avenue, Zanesville, and one hour prior to funeral services from 10:00 AM till 11:00 AM, at the church. Funeral Services to Celebrate Ken’s Life will be held 11:00 AM, Thursday, January 5, 2017, at Coburn United Methodist Church, 3618 Maple Avenue, Zanesville, with Pastor Justin Williams officiating. Ken will be laid to rest in Zanesville Memorial Park with VFW Post 1058 conducting Full Military Honors. Memorial Contributions may be made to Colburn United Methodist Church, 3618 Maple Avenue, Zanesville, Ohio, 43701 in Ken’s Memory.

The family of Kenneth "Ken" E. McPeck created this Life Tributes page to make it easy to share your memories.

Send flowers to the McPeck family.