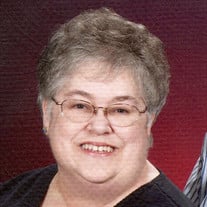 Karen L. McPeck, 69 of Zanesville, died 12:45 AM, Saturday, April 22, 2017 at Genesis Hospital following a brief illness. She was born Wednesday, June 4, 1947 in Zanesville, the daughter of Harold Ross and Betty (McCurdy) Ross. She married Kenneth “Ken” McPeck on September 17, 1967 and was a member of Coburn United Methodist Church. Karen was employed in the family business of Ross IGA for many years and most recently as secretary with Coburn United Methodist Church. For the past 40 plus years Karen operated Karen L. McPeck Tax Preparation Service, helping many local families with their taxes annually. Karen was a crafter and enjoyed many types of crafting, even being published in a national magazine. Karen could always be seen helping her husband, Ken at all the car shows. Karen is survived by two sons; Kyle (Melissa English) McPeck of LaGrange, KY and Kory (Kirsten) McPeck of Coshocton; four granddaughters: Lydia, Kiera, Mallory and Madison; one sister: Gail (Robert) Hartman of Dresden and many nieces, nephews and cousins. In addition to her parents, Karen was preceded in death by her husband: Ken who died January 1, 2017. The McPeck Family would like to thank Willow Haven Care Center and DaVita Dialysis Center of Zanesville for the special care and attention they provided to Karen over the past years. Friends may call from 5:00 to 8:00 PM, Tuesday, April 25, 2017 at the Hillis, Combs & Nestor Funeral Home, 935 Forest Avenue, Zanesville, and one hour prior to services from 9:30 AM till time of service at the church. Funeral Services will be held 10:30 AM, Wednesday April 26, 2017 at Coburn United Methodist Church, 3618 Maple Avenue, Zanesville with Pastor Justin Williams officiating. Karen will be laid to rest next to her husband in Zanesville Memorial Park. Memorial contributions may be made to Coburn United Methodist Church, 3618 Maple Avenue, Zanesville, Ohio, 43701 in Karen’s memory.

The family of Karen L. McPeck created this Life Tributes page to make it easy to share your memories.

Send flowers to the McPeck family.