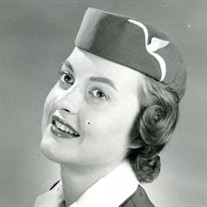 June Smith Bopeley of Zanesville died on September 16, 2016 at Genesis Morrison House Hospice. She was born in Louisville, Kentucky on July 21, to Arch & Viola Smith and was preceded in death by a sister, Lynn Reilly and three half-sisters Ann, Marilee and Dadie After graduation from Atherton High School in Louisville she attended the University of Louisville until becoming a Flight Attendant for Eastern Airlines based in Miami, Florida. After her marriage she worked in reservations for Eastern in Baltimore and Cleveland. June and Tom Bopeley were married in Louisville on December 27, 1958. She is survived by her husband, her daughter Lynn of Colorado, one son Daniel (Amy) of Oregon, her grandchildren Lucy, Mariemma, Olivia and Branson. Her grandchildren were her life force and she never missed an opportunity to visit them or to have them visit her. June loved life and the people she shared it with. She was an avid bridge player, enjoyed travel and attending the activities of her children and grandchildren. Although not affiliated with any established religion, she was a true Christian and lived her life by the doctrine of “Do Unto Others As You Would Have Them Do Unto You.” June Bopeley was a kind person and will be greatly missed by family and friends. Pastor Dean Cole will officiate a Non Denominational Service at 3:00 PM, Monday, September 19, 2016 at Hillis, Combs & Nestor Funeral Home, 935 Forest Avenue, Zanesville. The family will receive friends and relatives from 1:00 PM till time of service. Burial will follow in St. Patrick’s Cemetery in London at a later date. In lieu of flowers memorial contributions may be made to Genesis Morrison House Hospice, 713 Forest Avenue, Zanesville, Ohio, 43701. To sign the online guestbook or leave a personal note of condolence please visit www.hilliscombsnestor.com

June Smith Bopeley of Zanesville died on September 16, 2016 at Genesis Morrison House Hospice. She was born in Louisville, Kentucky on July 21, to Arch & Viola Smith and was preceded in death by a sister, Lynn Reilly and three half-sisters... View Obituary & Service Information

The family of Mrs June Smith Bopely created this Life Tributes page to make it easy to share your memories.

Send flowers to the Bopely family.