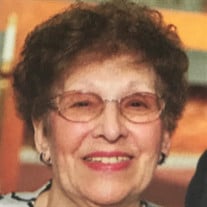 Josephine L. "Jo" Marshall, 96 of Zanesville, died 11:17 AM, Saturday, January 13, 2018, at Brookdale Assisted Living in Zanesville. She was born Tuesday, January 25, 1921, in San Biagio, Sicily, the daughter of Alfred Maniscalco and Vincenza J. (Alessie) Maniscalco. She married the love of her life, Gerald Eugene “Gene” Marshall on Saturday, December 2, 1950, and was a member of St. Thomas Aquinas Catholic Church for 96 years. For anyone who knew Josephine, she never met a stranger. She began her career in personnel at Hazel Atlas. After this, she began her life long career at Adornetto’s Pizzeria first in the kitchen as a cook and then became the smiling face that greeted customers in the dining room. Jo also worked as a receptionist for Lily Ann’s and The Hair Affair. Jo’s greatest gift was always making others feel special, and to her, family was everything. Jo is survived by one daughter: Lisa Ann and husband Dan Wampler of Cincinnati, three grandchildren: Justin Wampler of Cincinnati, Alissa Wampler of Tampa, FL and Danielle & David Culbertson of Columbus; two great granddaughters: Gabrielle and Isabelle Jo Culbertson. She is also survived by a loving niece Gina Horn, and nephews Jimmy and Tony Adornetto and Joseph Wells as well as many great nieces, nephews, and cousins, and dear family friends. In addition to her parents, Jo was preceded in death by her husband, Gene Marshall; three sisters: Carmen Wells, Mary Horn and Catherine Adornetto. Per Jo's wishes no visitation will be held and a Funeral Mass will be celebrated at 10:30 AM, Friday, January 19, 2018, at St. Thomas Aquinas Catholic Church, 144 North Fifth Street, Zanesville, with Fr. Martin J. Ralko as Celebrant. Jo will be laid to rest beside her beloved husband of over 64 years, Gene in Mt. Calvary Cemetery. Memorial contributions may be made to Hospice of Central Ohio, 229 Cherry Valley Road, Newark Ohio 43055. The family expresses sincere thanks to her caregivers at Brookdale and Hospice of Central Ohio.

The family of Josephine "Jo" L. Marshall created this Life Tributes page to make it easy to share your memories.

Send flowers to the Marshall family.