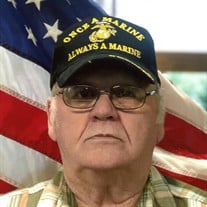 John H. Lawter, 75 of Zanesville, went to be with our Heavenly Father 7:59 AM, Wednesday, October 30, 2019, at Brookdale Memory Care Unit. He was born Monday, February 28, 1944 in Huntington, WV, the son of Raymond Lawter and Nora Lawter. He married Judy M. (Morrison) Lawter on Monday, February 16, 1987, and was a member of Trinity Evangelical Lutheran Church. John was a graduate of Maysville High School and served his country as a veteran of the United States Marine Corps during the Vietnam War, where he was a rifle instructor. For the following 28 years he continued to serve his country as a member of the Air National Guard retiring in 2001. He loved the outdoors, taking walks, long rides, and traveling the United States. John enjoyed camping, cooking while camping, going out to dinner and spending time with his family. He was a kind and caring husband, father, grandfather and friend who will be greatly missed. In addition to his wife of 32 years: Judy Lawter, John is survived by three daughters: Heather Lawter of Zanesville, Shana Lawter of Akron and Deborah (Scott) Graham- Weekley of Zanesville; one son: Dick (Jennifer) Graham of Zanesville; eight grandchildren: Renner Hittle, Allie & Sydney Clark, Danielle & Karissa Weekley, Ashleigh, Kaitlyn & Baylee Graham; one great granddaughter: Rowan Shae Crosby Graham; three siblings: Bob (Linda) Lawter of N.C., David Lawter of Columbus and Joyce Lawter-Whetzel of N.C. and several nieces and nephews. In addition to his parents, John was preceded in death one brother: Raymond Lawter and one sister-in-law: Judy (Van Sickle) Lawter. The family would like to thank the staff of Brookdale Memory Care Unit and Interim Hospice for the special attention and care given to John during his illness. Friends may call from 1:00 to 3:00 PM, Sunday, November 3, 2019, at the Hillis, Combs & Nestor Funeral Home, 935 Forest Avenue, Zanesville, where funeral services will follow at 3:00 PM, with Chaplin Noah Barr officiating. Full military honors will follow provided by the United States Marine Corps, VFW Post 1058 and American Legion Post 29. Memorial contributions may be made to the Alzheimer’s Association is John’s memory. To sign the online register book or to send a personal condolence note please visit www.hilliscombsnestor.com

John H. Lawter, 75 of Zanesville, went to be with our Heavenly Father 7:59 AM, Wednesday, October 30, 2019, at Brookdale Memory Care Unit. He was born Monday, February 28, 1944 in Huntington, WV, the son of Raymond Lawter and Nora Lawter. He... View Obituary & Service Information

The family of John H. Lawter created this Life Tributes page to make it easy to share your memories.

John H. Lawter, 75 of Zanesville, went to be with our Heavenly...

Send flowers to the Lawter family.