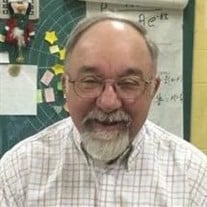 John B. Hohman, 70 of Zanesville, died, Thursday, September 21, 2017, following injuries sustained in a farming accident. He was born Tuesday, December 17, 1946, in Caldwell, the son of Bernard F. Hohman and Leona M. (Crum) Hohman and was a member of St. Nicholas Catholic Church. After obtaining his degree in 1970 from St. Joseph College in Rensselaer, Indiana, John began his teaching career at Bishop Rosecrans High School teaching all levels of Mathematics. He retired four years ago ending a 43 year teaching career. John was known for his love of learning, care and concern for his students, and his dedication to Bishop Rosecrans High School. He served as the first Lady Bishops Basketball Coach and was an avid collector of many things. John loved the outdoors, was an avid hunter and greatly enjoyed spending time on his farm near Adamsville. John was a man of integrity who lived his faith as evidenced by his devotion to his family, friends, and faith, often helping those less fortunate. John is survived by one daughter: Jessica Hohman of Zanesville; three step-daughters: Crystal Henry of Zanesville, Sherry Turner of McConnelsville and Pamela Winland of Zanesville; one step-son: Bob Reed of Zanesville; ten step-grandchildren; ten step-great grandchildren; two brothers: James (Mary Jo) Hohman of Aurora & Andrew (Donna Proctor) Hohman of Indianapolis; four sisters: Teresa (Patrick) Paul of Zanesville, Mary (Terry) Finley of Zanesville, Martha Goslin of Newark and Rita Marie Hohman of Warsaw; several nieces, nephews and cousins. John was preceded in death by his parents and one brother-in-law: Lyn Goslin Friends may call from 2:00 to 4:00 and 6:00 to 8:00 PM, Tuesday, September 26, 2017, at the Hillis, Combs & Nestor Funeral Home, 935 Forest Avenue, Zanesville, where a Christian Vigil will be held at 7:45 PM. Mass of Christian Burial will be Celebrated 10:30 AM, Wednesday, September 27, at St. Nicholas Catholic Church with Fr. Martin J. Ralko as Celebrant. Committal Prayers with visitation will be offered between 1:00 and 1:30 PM, at St. Mary of the Immaculate Conception Roman Catholic Church, 43700 Fulda Road, Caldwell. John will be laid to rest in St. Mary’s Cemetery. Memorial Contributions may be made to Bishop Rosecrans High School, 1040 East Main Street, Zanesville, Ohio 43701. Bishop Rosecrans is establishing a scholarship in John’s memory for a Rosecrans graduate who plans on majoring in mathematics or engineering.

John B. Hohman, 70 of Zanesville, died, Thursday, September 21, 2017, following injuries sustained in a farming accident. He was born Tuesday, December 17, 1946, in Caldwell, the son of Bernard F. Hohman and Leona M. (Crum) Hohman and was a... View Obituary & Service Information

The family of John B. Hohman created this Life Tributes page to make it easy to share your memories.

Send flowers to the Hohman family.