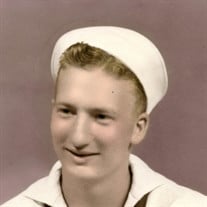 John Wesley Bradford of Zanesville, Ohio passed away on Tuesday, March 29 at the Oaks at Northpointe at the age of 94. He was blessed with excellent health in his lifetime. John was born September 5, 1921 in Washington, Pennsylvania to the late Hice and Mary Babbitt Bradford. He graduated from Washington High School and worked as a mould maker at Hazel Atlas and Brockway Glass. He retired at the age of 62. He and his wife enjoyed traveling after his retirement. John enlisted in the U.S. Navy during World War II. He was stationed in Key West, Florida and Cuba where he served as an aircraft mechanic. This past August and September, John was honored to have his Navy photographs, World War II postcard collection, and Bradford family genealogy displayed in a showcase at the local library through the Muskingum County Chapter Ohio Genealogy Society. He was also honored at the Washington Train Station in Washington, Pa. by having his name, branch of service, and dates of service engraved on a brick of the walkway along with his three sons who are also veterans. John was truly a part of the Greatest Generation. John married Helen Boyko in 1946. He was a dedicated husband and father. His children are honored to have been raised by such a gentle and kind man. They will cherish many happy memories of family get togethers, outings, and vacations. John was a member of St. Nicholas Church. He donated many hand crafted wooden items to the St. Nicholas Christmas Bazaar. John loved tools. He made a grandfather's clock for himself and his wife as well as wall clocks for each of his children. In his later years, he kept a collection of tools in his car and under his bed at his assisted living facility. John did his own packing when moving from one facility to another. When helping him unpack at his new facility, his family discovered a big hacksaw in his suitcase. They always wondered if he was planning a breakout! John also loved desserts. In his younger years he would often announce "I'm going to have to put that last piece of cake out of it's misery." In his later years he was observed to eat his dessert before checking out his regular food. Even though John was generally quiet, he had a great sense of dry humor and enjoyed using sarcasm to make people laugh. He was able to crack himself up, not to mention those around him! He kept this up even in his final days. In addition to his parents, John was preceded in death by his wife of 62 years, Helen Boyko, a beloved granddaughter Leslie Ann Bradford, his brother Walter Bradford, and his sister Frances Van Gilder. John developed a special friendship with Colleen Williamson who passed away last August. He is survived by his children, James (Donna) Bradford of Mooresville, Ind., John (Yvonne) Bradford of Washington, Pa., Kathy (Robert) Fahey of Nashport, and David (Tammy) of Zanesville. John is survived by 7 grandchildren and 8 great-grandchildren. The family would like to thank the staff at The Oaks at Northpointe and Genesis Home Hospice for their many acts of kindness towards John. John's Wisdom for a Long and Happy Life: 1. Spend time with those you love. 2. Make someone laugh. 3. Eat dessert first. 4. Pack your hacksaw. 5. Go to church every Sunday. 6. Don't buy green bananas- John said you can't be sure you'll be around to eat them. 7. In John's words "Take good care of yourself, stay healthy, and be careful." Friends may call 6-8 PM, Friday, April 1, 2016 at the Hillis, Combs & Nestor Funeral Home, 935 Forest Ave. Zanesville, where a Christian Vigil Service will be held at 7:45 PM. Visitation will also be held 9-10 AM on Saturday at the funeral home prior to the service. A Mass of Christian burial will be celebrated at 10:30 AM on Saturday, April 2, 2016 at St. Nicholas Catholic Church, 925 Main St. Zanesville with Father Martin Ralko as celebrant. Burial will follow in the Mount Olive Cemetery where VFW Post 1058 & American Legion #29 will conduct full military honors. Memorial contributions may be made to the Genesis Morrison House, 713 Forest Avenue, Zanesville, Ohio 43701.To sign the online guestbook or to leave an online condolence please visit www.hilliscombsnestor.com.

John Wesley Bradford of Zanesville, Ohio passed away on Tuesday, March 29 at the Oaks at Northpointe at the age of 94. He was blessed with excellent health in his lifetime. John was born September 5, 1921 in Washington, Pennsylvania to the... View Obituary & Service Information

The family of John Wesley Bradford created this Life Tributes page to make it easy to share your memories.

John Wesley Bradford of Zanesville, Ohio passed away on Tuesday,...

Send flowers to the Bradford family.