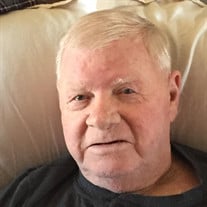 John R. Auflick, 81, of Dresden, Ohio, passed away at 2:08 p.m. on Thursday, December 21, 2017, at his home after a long battle with cancer and COPD. He was born on July 9, 1936, in Nelsonville, Ohio, the son of the late James Auflick and Blanche (Matheney) Auflick. He was preceded in death by his beloved wife Susan (Martin) Auflick on April 30, 2008, whom he married on April 15, 1977. John was employed at the Diamond Brick Plant in Nelsonville for 18 years. He moved from Nelsonville in 1993, lived in Wisconsin and Pennsylvania where he worked various employments at a Mink Farm in Wisconsin and Sylvania in Pennsylvania from which he retired. He was a previous guest member of the Nelsonville VFW for many years and a very active member in the Oil Creek Beagle Club for many years and was a Registered Beagle Breeder. He participated in several Beagle Field trials with his son Rob for many years. He is survived by his five children: Kathleen Walker, Kristie (Terry) McDonald, “Jake” Jonetta Smathers, Jeanetta Lucas, Robert (Ashlyn) Auflick and stepchildren Diane (special friend Gordy) Graham, Rick (Irene) Graham, Julie (Darren) Beattie, sister Blanche (Bill) Irvin, grandchildren Christopher Shock, Dylan Walker, Carly Walker, Cassie McDonald, Russell McDonald, Shannon Smathers-Davis, Krysta Wasson, Zackary Lucas, Owen Auflick, Macy Auflick, step-grandchildren Rachel Graham, Tiffany Beattie, Kyle Beattie, and several great grandchildren, nieces, nephews and cousins. John was preceded in death by his parents, wife, four infant siblings and James Auflick, Robert and Stella Auflick, Mabel and Frank James, Sylvia Matheney Bond, Garnet (Bake) McCollister, Andy and Margaret “Red” Auflick, Rod and Joan Auflick, brother-in-law’s Bob Martin and Bill Irvin, and Son-In-Law Greg Smathers. There will be a loving cremation with care performed. There will not be any services performed other than a private service when John’s remains are buried alongside his beloved wife Sue in Pittsfield, PA. A Celebration of Life will be held at a later date to be determined. A special Thank You goes out to the wonderful and caring staff at Genesis Home Hospice and Genesis Morrison House. We are all blessed with the wonderful care they gave our loved one. In lieu of any other contributions, he requested if anyone wishes to contribute in his memory that donations be made to St. Jude’s Children’s Hospital so that children could have a better chance at living a quality, fulfilling life. St. Jude’s Research Hospital, 501 St. Jude Place, Memphis, TN 38105. Website: St.jude.org. To sign the online guestbook or leave a personal note of condolence please visit www.hilliscombsnestor.com

The family of John R. Auflick created this Life Tributes page to make it easy to share your memories.

Send flowers to the Auflick family.