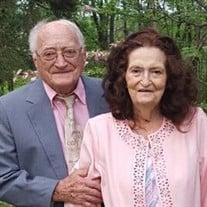 James "Jim" A. Theisen & Patricia “Patty” E. Theisen joined each other in heaven, Sunday, May 5, 2019, at Genesis Hospital. Jim was born Tuesday, October 16, 1928, in Rose Farm, the son of Andrew Theisen and Kathryn (McAvoy) Theisen. Patty was born Thursday, May 29, 1930, in Chillicothe, the daughter of Pearl Gebhart and Elizabeth (Bowman) Gebhart. They were married Thursday, May 29, 1947, and celebrated their love and lived their wedding vows to each other every day for over 71 years. Even death could not keep them apart; Jim & Patty will celebrate their 72nd Wedding Anniversary in heaven at the end of this month. They were both members of East Fultonham United Methodist Church, where Jim was a Trustee and Patty served as Treasurer for many years. Jim started his working career at Mr. Epply’s Farm, he was a Diesel Mechanic for many years with Lucas Auto Sales, Zanesville Rapid Transit, Weigand’s GMC, Hennes Trucking, R & S Transport and retired from SME Trucking. He was also owner and operator of Theisen Engine Barn, and was a member of The Sons of The American Legion, Post 29. Patty was a former employee of Bintz Brothers, YWCA, and was owner and operator of Nimble Thimble Shop. She was a baker and cake decorator, Girl Scout leader and was a member of American Legion Aux, Post 29. Jim & Patty greatly enjoyed their farm and the time they spent with their horses, cattle, dogs, cats, dogs and most four legged creatures. They enjoyed fishing, trips to Canada and loved the time spent traveling in their motorhome. Jim and Patty were proud parents of four children: Sally (Pete) Stewart, Butch Theisen, Dan (Paula) Theisen and Becky Gallis all of Zanesville; 12 grandchildren; 31 great grandchildren; 5 great-great grandchildren; and several nieces and nephews; Jim is survived by one sister: Carol Pletcher. Jim & Patty were preceded in death by their parents; one son-in-law: Ed Gallis; one grandson: Davey “Hank” Buzza; Jim was also preceded in death by one brother: Carl Raymond Theisen and one sister: Lana Emrick. Patty was preceded in death by one brother: Eugene Gebhart. Friends may call for Jim & Patty, Thursday, May 9, 2019, from 2:00 to 4:00 & 6:00 to 8:00 PM, at the Hillis, Combs & Nestor Funeral Home, 935 Forest Avenue, Zanesville, and from 10:00 AM till 11:00 AM, Friday, May 10, 2019, at First Hope United Methodist Church, Buckeye Street, Crooksville, where funeral services will follow at 11:00 AM. Pastors Matt & Gaye Blau will officiate. Burial will follow on the Theisen Family Farm. Memorial contributions may be made to Breaking Free Therapeutic Riding Center Inc., 2795 N Moose Eye Rd, Norwich, OH 43767, in Jim & Patty’s memory. To sign the online guestbook or leave a personal note of condolence please visit www.hilliscombsnestor.com.

The family of Jim & Patty Theisen created this Life Tributes page to make it easy to share your memories.

Send flowers to the Theisen family.